With England going into a month long ‘lockdown’, the Bank of England has launched a further £150 billion quantitative easing (QE) stimulus package to boost consumer spending(1), whilst maintaining interest rates at their record low of 0.1%(2).

They will again purchase government bonds (gilts) to increase the money supply commonly referred to as ‘printing money’. Any of these news items would usually be the ‘top story’, but events across the Atlantic continue to take centre stage.

Since its first running in 1789, including the one this week, there have been 59 elections for the US President(3). US Presidents are elected by what is known as the Electoral College system, which was created by the US Constitutional Convention in 1787. It was set up as a compromise between those who, on the one hand, wanted the President to be elected by direct voters (i.e. a popular vote) and, on the other hand, to be elected by the US Congress. In 53 of the previous 58 elections, the Electoral College system and Popular Votes have seen the winner getting the highest votes in both ballots.

However, in five close historic elections the winner of the Electoral College was the loser of the popular vote(4).

From an investment perspective however, the question is what impact unpredictable US presidential elections have on investment markets?

Republican Texas Governor George Walker Bush and Democrat Vice President Al Gore fought one of, if not, the closest election in US history. At the close of the polls on 7th November 2000, Oregon, New Mexico and Florida couldn’t declare as the total ballots were too close. Gore ended up winning Oregon and New Mexico; he won New Mexico by only 366 votes. However, Florida was yet to declare.

Florida’s Secretary of State Katherine Harris announced Bush as the winner by a miniscule 537 votes. However, because there were still piles of punch cards that had been set aside because of voter errors resulting in anomalies called “hanging chads,” “pregnant chads” and “dimpled chads,” Gore sued, arguing that not all ballots had been counted.

In the subsequent court case in the Florida Supreme Court, Gore won, and the judges ordered a recount. But Bush appealed to the U.S. Supreme Court. 36 days later on 12th December 2000, the 9 Supreme Court judges eventually voted 5 to 4 and reversed the Florida court’s decision, thereby stopping the recount. Bush won the 25(5) Electoral College votes from Florida which meant that Bush attained 271 Electoral College votes versus Gore’s 266, winning the presidency. Gore ended up getting 500,000 more votes in the popular vote(4).

So how did the political uncertainty affect financial markets? 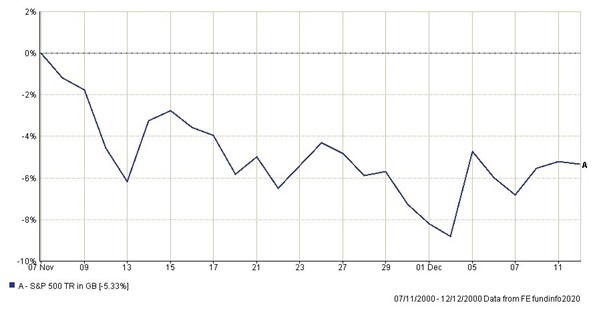 Despite the uncertainty during the 36 days between the election day on 7th November 2000 and Supreme Court decision on 12th December 2000 the U.S. stock market – here represented by the S&P 500 (in GB pounds) – didn’t sell off dramatically and was only down 5.33%.

Context and ‘zooming out’ are also essential as the graph of the S&P 500 below shows. 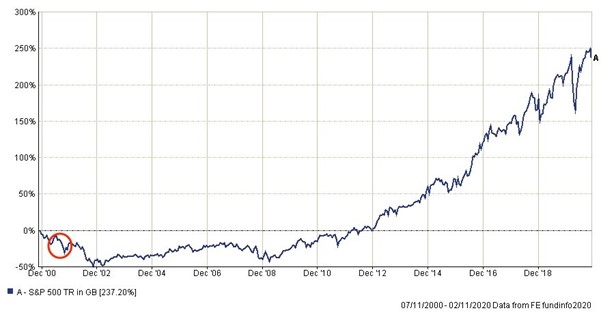 The red circle shows the market impact of those 36 days in 2000 in context when viewed over an appropriate time period, i.e. covering the near 20-year period from the US election day in 2000 to this week. As can be seen, the S&P 500 – spurred on recently by the growth in the FANMAGs(7) – has seen over 237% (in GB pounds) total return growth since Gore v Bush’s election day; and that includes the 5.33% loss at the end of 2000.

No matter what short-term events occur – including US presidential elections and their fallout – and remembering that “past performance is no guide to future returns”, investors should ignore these short-term events; at least from an investment perspective.
Focus should be on diversifying across individual stocks and across different asset types (i.e. bonds as well as equities, etc.), across geographical jurisdictions (e.g. globally), across investment styles (i.e. active management and index/passive investing) and across different investment philosophies (i.e. growth and value).

It should be remembered that no matter how diversified a portfolio is across asset types, geographical jurisdictions, investment styles and philosophies, risk and reward do typically go hand-in-hand and as such, risk can never be eliminated completely. It is also important to remember that we very often have a long-term investment time horizon. However, smart diversification across assets, geographical jurisdictions, styles and philosophies can help investors minimise their risks. Although it does not guarantee against loss, smart diversification is the most important component of reaching long-range financial goals while minimising risk.

The next market briefing will be published on 18th November 2020.