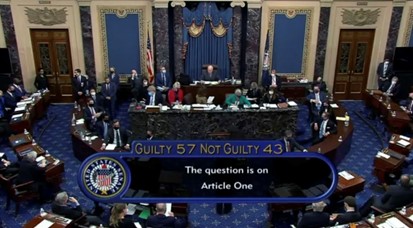 Over the weekend, former President Donald Trump was acquitted by the US Senate in his second impeachment trial.

The trial dealt with his role in the attack on the US Capitol on 6th January 2021.

Although seven Republicans joined every Democrat to declare Trump guilty on the charge of “incitement of insurrection”, the verdict highlights the influence the 45th president still has over the ‘Grand Old Party’.

Although the outcome was never really in doubt, the 57-43 vote was the most bipartisan support ever for a conviction in a presidential impeachment trial.

This is the largest reduction in the UK economy since the Great Frost of 1709(2).

As the graph below shows, both US and UK markets have had a positive start up to the middle of the first quarter of 2021 despite the news updates mentioned above. 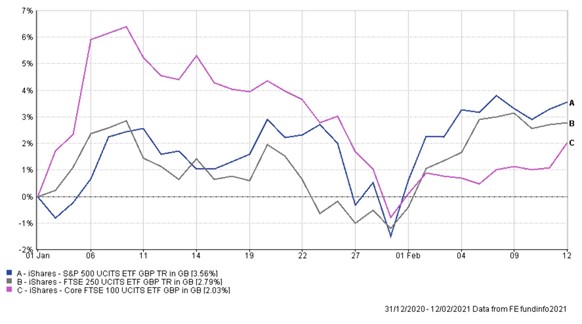 Let’s see how they fare in the second half of the quarter.

Looking at the UK performance numbers in the graph above, despite the headline annual GDP fall, they are perhaps consistent with the Office for National Statistic (ONS) announcements that were made regarding the most recent UK GDP numbers.

According to the ONS, the UK economy was estimated to have grown by 1.00% for the period October through to December (Q4) when compared against Q3. However, “despite two consecutive quarters of growth, the level of GDP in the UK is 7.8% below its Quarter 4 2019 level.”

Although records from the ONS – and any predecessor – began after the Great Frost of 1709, as announced above and shown in the graph below, the ONS went onto say, “over the year 2020 as a whole, GDP contracted by 9.9%, marking the largest annual fall in UK GDP on record(4). 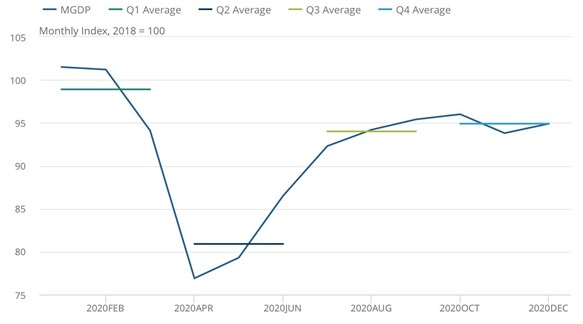 The ONS continued by saying that there were several factors that led into “the largest annual fall in UK GDP on record”, in the main, of course, the pandemic.

They commented that the Q4 2020 GDP numbers captured “the direct effects of the coronavirus (COVID-19) pandemic and the government measures taken to reduce transmission of the virus.”(4)

They commented that monthly analysis of the three months in Q4 showed the impacts of the “differing degrees of restrictions in place”. For example, “GDP increased by 0.6% in October, where health had the largest contribution because of an increase in the volume of activity, partly due to the coronavirus testing and tracing schemes across the UK. In contrast, accommodation and food service activities acted as a large drag on growth in October as tightening coronavirus measures had an adverse impact on trade and a subsequent lack of demand.”(4)

Moving into November, unsurprisingly “GDP fell by 2.3% as restrictions were in place to varying degrees across all four nations of the UK. The largest contributor to this fall was accommodation and food service activities, followed by wholesale and retail trade, other service activities and arts, entertainment and recreation, reflecting the reintroduction of restrictions in some parts of the UK. These four sectors accounted for nearly 80% of the fall in services.” (4)

And finally, in December, “GDP increased by 1.2% … as restrictions were eased early in the month in many parts of the UK.” They identified that “the largest contributor to this increase was accommodation and food service activities and other services, as the easing of restrictions across many parts of the UK in early December boosted demand for these consumer facing services. Health also contributed positively to growth … as a result of increased activity, mainly due to the coronavirus testing and tracing schemes across the UK.”(4)

To gain a fuller picture of any longer-term effects the graph below should be seen in the context of the bounce back this year. That said, it does show that the 9.9% reduction in GDP, means that the UK economy has fallen to a level not seen since 2013. 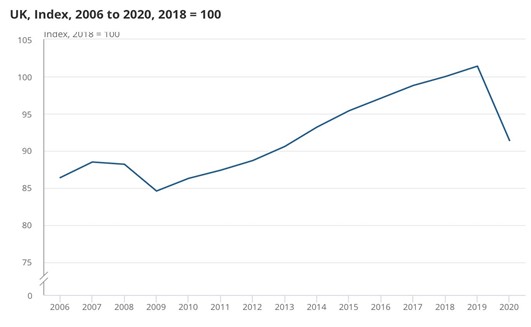 In context – other countries

Several other countries have published first estimates of GDP for the final quarter of 2020. In addition to the UK, these countries include the US, Germany, France, Italy and Spain. As the graph below shows, these initial estimates show the UK is far from being alone in what is a mixed picture of economic performance in Quarter 4 2020. 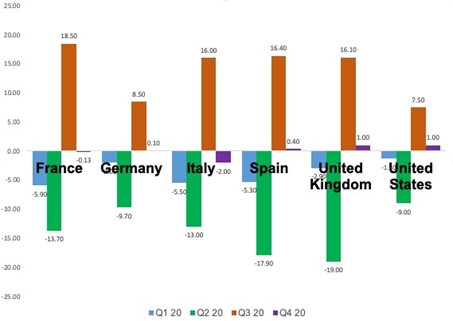 Based on data supplied by
Office for National Statistics

For instance, real GDP is estimated to have grown by 0.1% and 0.4% respectively in Germany and Spain. Whereas GDP in France and Italy fell by 1.3% and 2.0% respectively in Q4. Despite these contradictory quarterly movements, the level of GDP in all of these countries remains below where it was before the effects of the pandemic.(4)

Irrespective of broader news, even headlines that discuss economic matters, and remembering that “past performance is no guide to future returns”, from an investment perspective, investors should have a balanced, longer term view.

And finally, this week in history …

19th February 1885 – In the US Thomas Edison is granted a patent for his gramophone, also known as the phonograph(6)

Issue 30 of the market briefing will be published on St David’s Day
1st March 2021.