Three sides to a story

A father once said, “son, always remember that there are three sides to a story.’

All conversations are remembered differently by the those having them. There is likely ‘one truth’ but no-one will ever really know what that is.

Often, one person isn’t right and the other wrong; it’s just whilst they are listening to the same words, it’s human nature to hear different things.

No matter which side of the debate you are on from a UK constitutional or human standpoint, including having no opinion at all, it is very sad to see a family at war with itself. Over time cooler heads will ideally prevail, where they’ll be able to resolve their differences.

The events surrounding ‘the interview’ are very unlikely to impact financial markets. Recent events in the US, however, do. Let’s review how.

Records broken across the pond

Putting all those noughts into context is difficult so let’s compare against two historic – and enormous – US financial aid packages; Roosevelt’s ‘New Deal’ in 1929 in response to the Great Depression, and Obama’s ‘Recovery Act’ in 2009 in response to the so called Great Financial Crisis that began in 2007.

Academics state that due to the different conclusions that can be drawn, it is impossible to draw specific parallels. However, comparing two statistics does show the enormity of Biden’s aid package, but also shows the enormity of previous aid packages.

Putting this in context, Roosevelt’s economic boost was equivalent to 40%(1) of the US’s economic output (gross domestic product; GDP) in 1928. 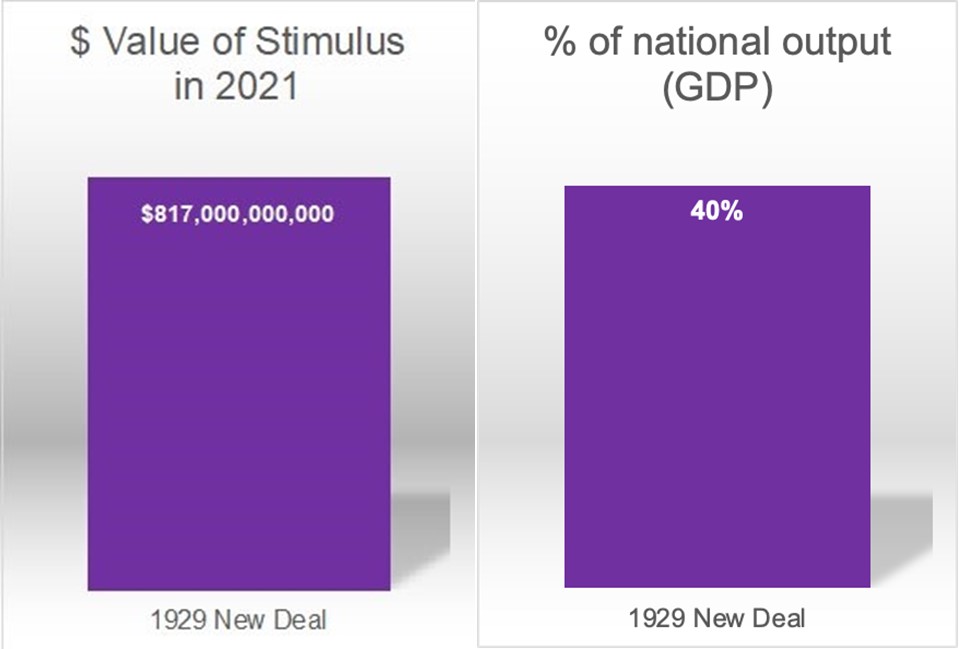 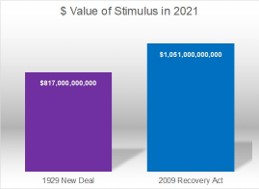 However, putting this in perspective, Obama’s economic injection was equivalent to just under 6%(1) of the US’s economic output in 2008; significantly lower than Roosevelt’s stimulus 8 decades before in terms of the % of gross domestic product (GDP). 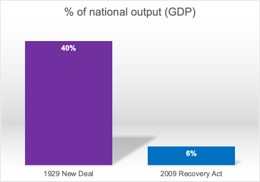 No inflation adjustment is needed for Biden’s stimulus as it is happening now.

As mentioned, the value of the 2021 stimulus is an enormous $1.9 trillion; in UK sterling terms this is the first time it has exceeded £1trillion pounds sterling(2).

However, putting this in context with the ‘New Deal’, Biden’s stimulus was equivalent to just over 9%(1) of the US’s economic output in 2019(3); still significantly lower than Roosevelt’s stimulus 90 years ago in terms of % GDP(1).

How have markets reacted?

Irrespective of comparisons with history, the 2021 relief package has been designed to support the American economy against the effects of Covid, but it also gave Wall Street a significant nudge.

When converted into pounds sterling, the £1.36 trillion(2) stimulus package will send out cheques to almost 160 million Americans, valued up to just over £1,000(2) each. It will also increase unemployment benefits.

This enormous injection of cash directly into the economy has fuelled fears of renewed inflation amidst the pandemic recovery.

This has caused unease and recent volatility in equity markets and US government bond yield to spike upwards. However, these fears have lessened, at least for now, following a fall in weekly unemployment claims increased prospects of a job market recovery.

The Dow Jones Industrial Average is one of the oldest market indices in the US still in existence and covers 30 large, publicly-owned companies(4).

This record close is one of a dozen record highs since the turn of the year.

Although the record highpoint is newsworthy, context is important. As the graph to the left shows, the Dow Jones (shown here in £GBP terms) has recovered since the bottom of the bear market over a year ago.

Although that is good news, clearly the returns have been conservative when compared against the technology heavy S&P 500 index. 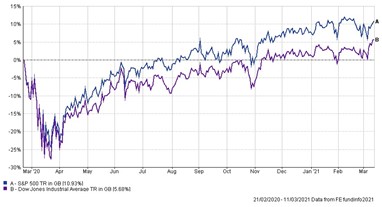 Irrespective of broader news, even headlines that discuss important international economic matters such as US President Biden’s stimulus, and remembering that “past performance is no guide to future returns”, from an investment perspective, investors should have a balanced, longer term view.