The assault on the US Capitol on 6th January has certainly kicked off the political year in a way no other year has started before.

… which as at the time of writing seems unabated. Just three days after the storming of the Capitol, with the US political landscape still polarised, the Democrat US Speaker of the House (of Representatives), Nancy Pelosi, tabled an Article of Impeachment against Republican President Donald Trump.

An impeachment is historic in its own right, only four have ever occurred in history. This impeachment, the fifth, results in President Trump being the only president being impeached more than once.

Following heated debate on the floor of the House, the resolution introducing the Article of Impeachment was passed with two notable elements. Firstly, 10 Republican Representatives ‘crossed the floor’ which made this the largest bipartisan impeachment in history, the consequence of which resulted in the second element being the highest vote ever supporting a presidential impeachment.

The next stage will see the article of impeachment ‘being walked’ over to the Senate in the coming days or weeks for trial.

The outcome of this is that it looks almost certain that President Trump will retain the presidency until President-Elect Biden takes over at midday (US eastern standard time) next Wednesday.

However, he may be subsequently barred from ever running again for the presidency.

The efficiency of delivery of injections differs between countries but the campaign to accelerate the number of ‘arms with jabs’ continues with speed.

The scale of the deal was modest in scope covering physical goods tariffs and quotas amongst other items. Questions remain on the service sector which is the largest part of the UK economy and one in which it runs a healthy trade surplus with the EU. Whatever you believe Brexit is, i.e., freedom by returning political sovereignty or an act of economic self-harm, the United Kingdom is now outside the EU.

How have markets reacted?

Context is always important, and so reviewing 2020 in entirety is a good place to start. 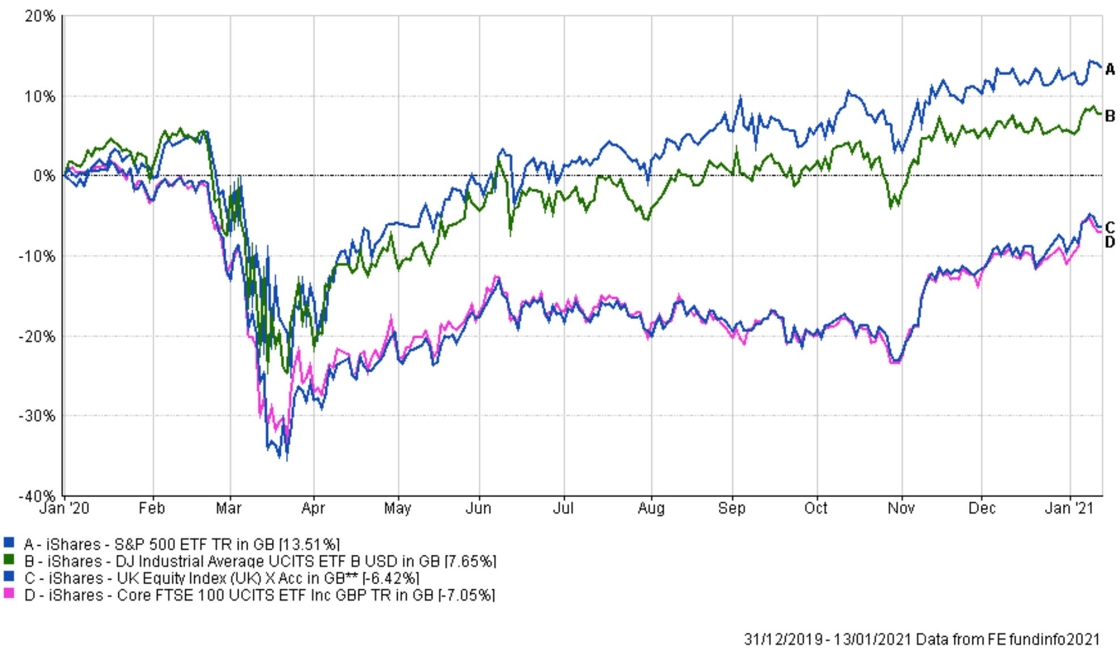 The message is clear; the US handled the Covid-caused bear market in February and March much better than the UK. This was in the main due to the massive influence of the FANMAG(3) stocks.
With 2021 now in mind, will this continue?

As always, past performance cannot be seen as a guide to what happens in the future. However, reviewing what 2021 has done – although only around a fortnight old – perhaps provides some insight. 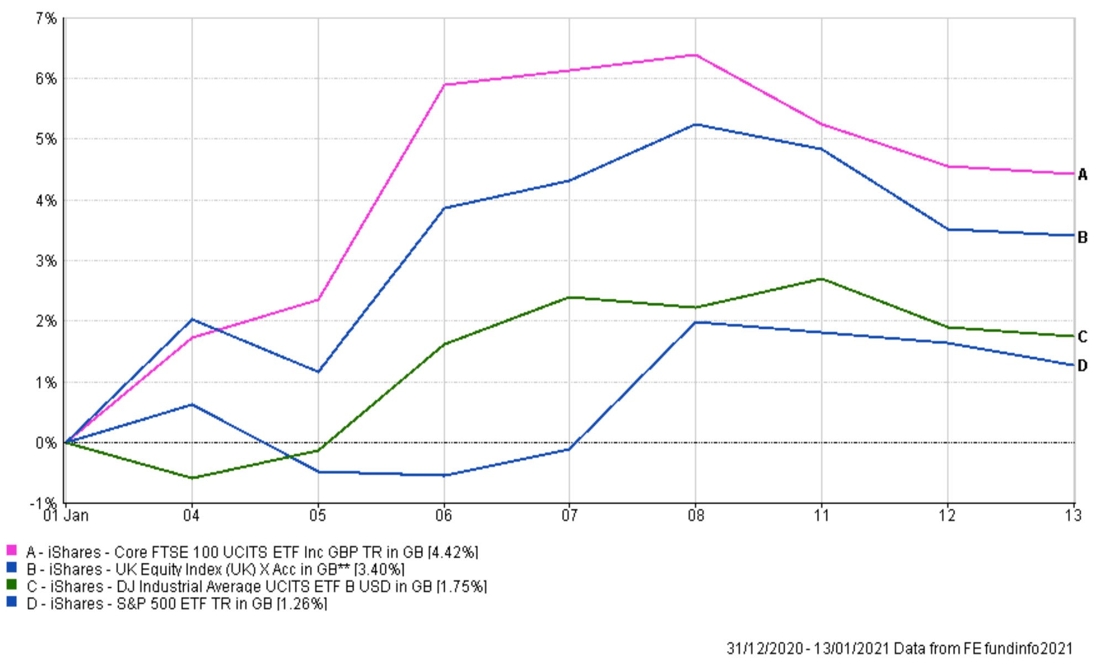 Albeit a very short time frame – which means nothing too much can be read into the data – it is interesting to note that the tables have turned. The graph shows that the two UK tracker funds outperforming their US counterparts between two and three times. Why? Any answers could be challenged but the following graph perhaps sheds some light. 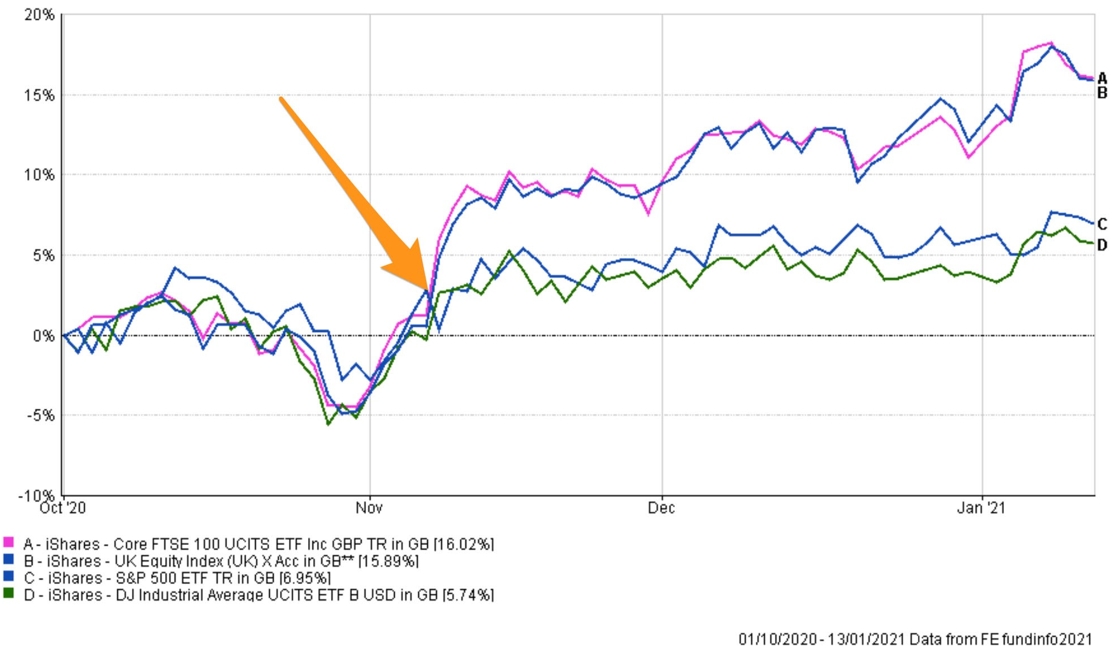 As shown, the beginning of Q4 2020 in October and early November saw the US markets continue their superior return over their UK counterparts. However, the tide began to turn around the beginning of November. The causes of this turnaround, albeit over a very short period of time, likely include a fraught US presidential election followed by President Trump and many other Republicans questioning its outcome combined with a totally inept handling of the pandemic. Although it perhaps may not seem it at times, the UK achieving a trade deal with the EU just in time and being the first nation to vaccinate a non-trial person, has perhaps led to a return in confidence in the UK market. UK stocks being considered undervalued on a range of valuation metrics as compared with their US equivalents has also helped.

Whilst remembering that none of us have a crystal ball about the future, the following are perhaps areas to look out for in the coming year:

Remembering that “past performance is no guide to future returns”, from an investment perspective, investors should ignore short-term matters.

Investors’ focus should be on ‘smart diversification’. This should include investing across different asset types, such as bonds as well as equities and across geographical jurisdictions, so they are not confined to one or two countries or regions. It should also involve investing across investment styles, that should include active management and index/passive investing, and across different investment philosophies that includes growth and value.

Although ‘smart diversification’ doesn’t guarantee performance in any way and does not eliminate risk completely, having a diversified portfolio across asset types, geographical jurisdictions, investment styles and philosophies can help investors minimise their risks.

It is also important to remember that it is often the case that investors have a long-term investment time horizon. So, although ‘smart diversification’ does not guarantee against loss, it will likely help with the most important component of reaching long-range financial goals whilst minimising risk.

Issue 28 of the market briefing will be published on 29th January 2021.