The Bank of England has announced a new £50 note will be issued, which will officially become legal tender on 23rd June this year. 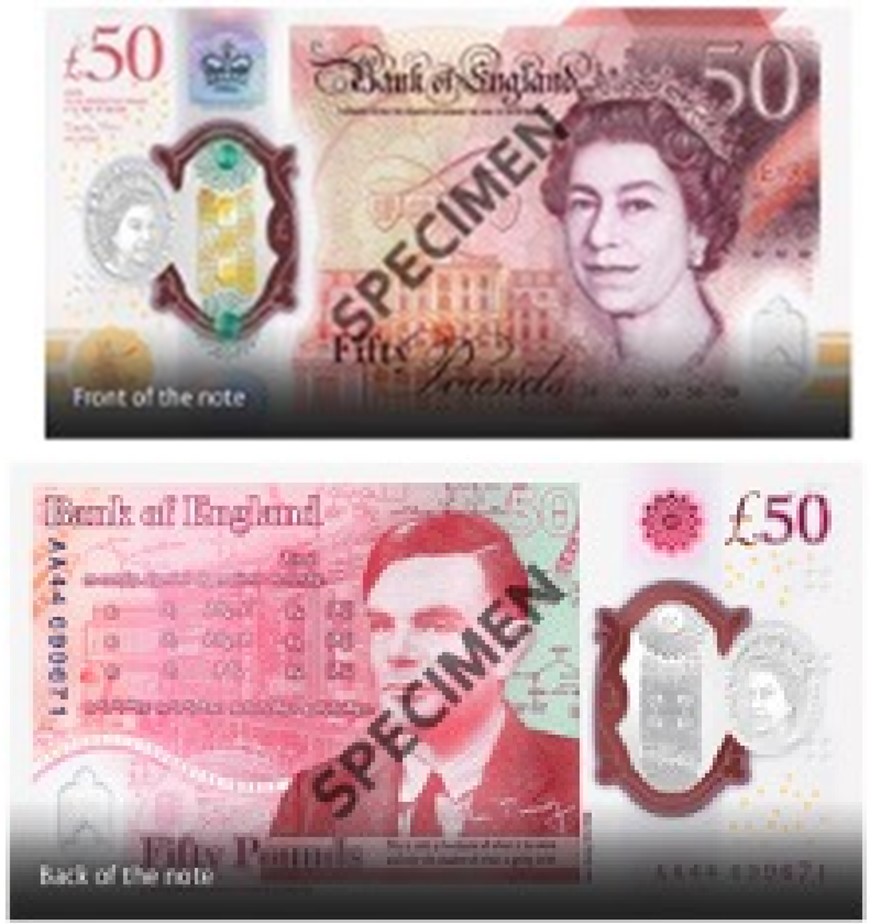 The first £50 note was issued in 1725. Unlike today, notes were used as a way of transferring money and not as everyday currency. Also, the notes were handwritten, which included the date, issue number, cashier signature, and precise value; sums could be added by hand if necessary, resulting in a total monetary value that could be
more or less than £50(2).

The new note will be printed on polymer, which is a thin and flexible plastic, and a recyclable material(2).

On the front of the note, raised print will be felt. This feature is deliberately tactile and helps the visually impaired identify the value of the note(1).

On the reverse side to the Queen, Alan Turing’s portrait appears.

This picture is based on a photo taken in 1951 by Elliott & Fry, which is part of the Photographs Collection at the National Portrait Gallery (1).

Alan Turing is best known for his work devising code-breaking machines during the Second World War, famously at Bletchley Park in Buckinghamshire. He played an essential role in the development of early computers, firstly at the National Physical Laboratory and later, at the University of Manchester.

Turing was posthumously pardoned by the Queen in 2013 for a conviction in 1952 for having a relationship with a man. His legacy continues to have an impact on our lives today as his work was integral in the development of computers and artificial intelligence.

Will interest rates go up?

The direct answer is we don’t know. However, context is important. As the graph to the right shows, since 2009 we have been in a period of very, very low interest rates. Although this graph only goes back to 1973, the green line confirms that the period we are living through is historically low; in fact, the current rate is the lowest rate since records began in 1694. 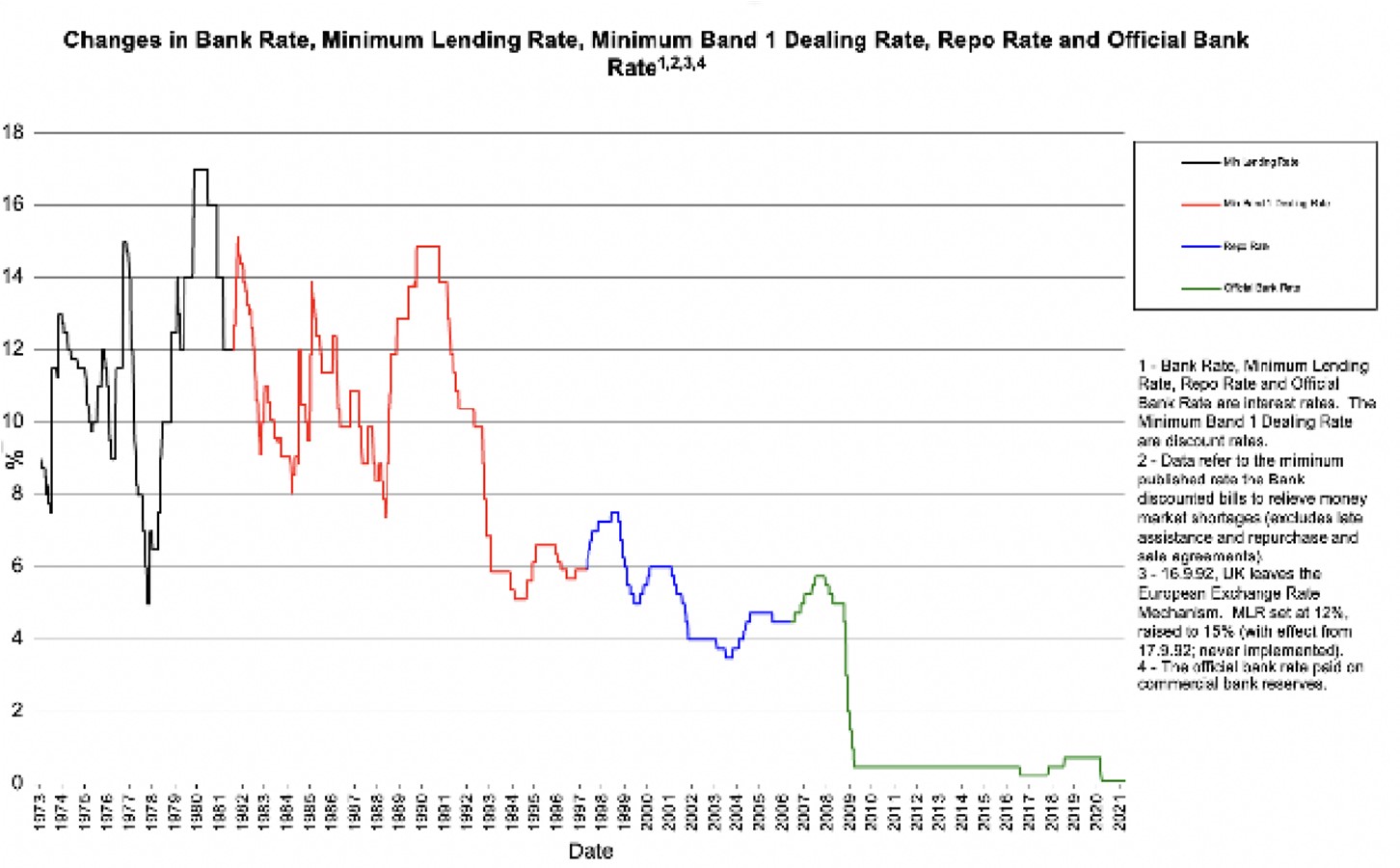 Although predictions are likely to be wrong, in an attempt to answer the question above, there are indicators which we can review which may suggest whether interest rates may go up or down.

The first indicator is when inflation is either below or above its official target. UK inflation is well below the official 2% target rate as measured by the CPI (consumer price index). If inflation remains below this target, then the Bank of England could cut interest rates or even theoretically, instigate a negative interest rate policy to encourage growth and inflation.

The opposite of course is true.

If inflation begins to rise, then the Bank of England may decide to increase interest rates; owing to the inherent weakness of the economy due to the pandemic this is not as likely as it would be in more ordinary times.

Which brings us to the second indicator; a significant world event which pushes us into extraordinary times.

The last major global extraordinary event is an example of this. As the near virtual line in the graph to the right shows, the financial crisis of 2008 caused interest rates to be cut from 5% to 0.5% to support the UK economy.

Although not as stark, the EU referendum vote in June 2016 resulted in the prospect of the UK’s departure from the EU potentially leading to an economic slump. The Bank of England reacted and decided to cut the base rate from 0.5% to 0.25% in August 2016.

And finally, with the pandemic arriving last year, two emergency cuts were made in March 2020 to the current 0.10% base rate.

The third indicator is whatever the state the UK economy is in. As referred to above, when the pandemic hit the UK early last year, it pushed the UK into its first recession since 2009(5). As we now know, 2020 saw the UK suffering its biggest crash in economic output in more than 300 years(6).

Continued weak economic growth, with the potential of further lockdowns across the four nations of the UK, likely reduces the chance of an interest rate rise any time soon. This situation is however fluid and subject to change as unpredictability remains high.

The fourth indicator is the UK unemployment figures. The more people who are unemployed, means there are fewer people spending money. In data released on 23rd March 2021, the total number of people unemployed between November and January
was over 1.7m, putting the unemployment rate at 5% (7).

The amount of people in unemployment also reduces the likelihood of an interest rate rise.

And, this rate may not reflect the true extent of actual unemployment, as the government furlough scheme remains in place until the end of April. Post April may tell us a different story.

Although clearly not a prediction as “past performance is not a guide to future events”, a Reuters poll at the beginning of 2021 revealed that the Bank of England is still expected to keep base rates at their current record low of 0.1%, at least, until 2024 at the earliest(8).

Irrespective of broader news, even headlines that discuss important national economic matters such as the Bank of England’s base rate decisions and remembering that “past performance is no guide to future returns”, from an investment perspective, investors should
have a balanced, longer term view.