There is no doubt that the world is going to look very different when we finally emerge from this pandemic, as shown by the phrase ‘new normal’ suddenly being on everyone’s lips.

The reality is we won’t know the full effects of Covid-19 until sometime after it’s been beaten. It is likely, albeit upsetting, that many businesses, including household names, will vanish. But new ones will start, benefitting from the ‘new normal’ delivering new products to new markets, as well as fulfilling demand for existing products and services. 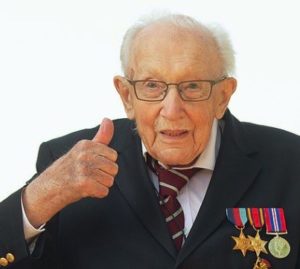 Remaining realistic, whilst being optimistic is essential. This optimism was shared by some of the world’s stock markets in April, with the US S&P 500(1) closing up 12.68%(2) ; its best month since January 1987, and with VE Day approaching, it’s third best month since the end of the Second World War (2) .

No matter what each of us feels about markets and the wider economy in general, UK national pride should be centred on former Captain, now Colonel Tom Moore, who has raised an astonishing £32.8m for the NHS. Optimism indeed.

When will markets recover?

If I had a pound for every time I’ve been asked that question in the last few weeks… well you know the end of that sentence. Clearly no one is able to answer that question. And although this briefing will review past bear markets and their characteristics, it is essential to remember that what has happened before (i.e. past performance) is no guide to what happens in the future.

Typically, bear markets have at least three, sometimes four phases. The four phases can be remembered by the acronym ‘R.A.C.E.’:

Many people see the beginning of a bear market as just an ordinary market event; markets fall and then they rise. In fact, if investors viewed every market downturn as the beginning of a bear market, no one would invest as their nerves wouldn’t cope. Having this attitude could have an impact on investment performance as market sentiment would be damaged every time a downturn occurred. However, there are clearly times, albeit in the significant minority, when a downturn predicates a bear market. The last few weeks, since around the 20th February, is evidence of this.

This occurs when investors realise that this downturn is more than the market behaving in its up and down cycle. Along with the impact of unexpected losses, comes the practical realisation that markets don’t always recover in the time investors may have experienced before. Investors’ confidence is then challenged and perhaps they allow their emotions to get the better of them and they sell their investments.

Markets halt their decline. The feeling that the market is in freefall is stopped as markets begin to stabilise. The alarm that investors felt previously, reduces; but there is still a feeling that things are bad. Investors now realise that markets fell for a real reason, and that until that reason is removed, they will continue to struggle. This period is marked by turbulence. Markets rally and investor sentiment oscillates between cautious optimism and despair. This is typically the bear market’s longest period, perhaps extending for many months, and in the case of the 1920s Great Depression, several years.

This is when markets begin their recovery. As with the bear market’s start, no one honestly realises its end until after it has happened. The news at the time is still bad; although some investors identify and expect improvement, it’s just they don’t know how long it will take.

Examples of the four phases of bear markets

The examples of the two most infamous bear markets in the last 35 years show how the four phases played out. 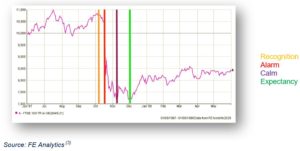 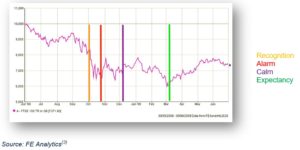 It’s important to know that there is no ‘silver bullet’ or ‘crystal ball’ in guessing when bear markets end and recovery commences. The four phases discussed above should not be seen as guaranteeing that this current bear market will behave in the same way. In fact, the bear market of 2000-02 – the ‘dot com’ bubble – is such an example in the sense that the share prices (most notably of IT companies) rose too quickly and with little justification to support their increases. Of course, the detail for each bear market varies, sometimes substantially, but the pattern of the four phases is roughly similar.

What phase are we in now?

With the enormous uncertainty about the current Covid-19 crisis still paramount, and the economic damage that the containment efforts have had, and will inevitably continue to have, market turbulence will likely remain a feature. However, the statistics that investment managers rely on will ultimately result in the financial markets being able to plan and price in various scenario outcomes.

Once the picture becomes clearer, the four phases discussed above will likely help investment managers, and investors alike, in navigating through this bear market. Clearly, past performance is no guide to future returns. However, markets may appear to have begun to ‘calm’; so perhaps we have entered the third phase? That does not mean that markets won’t decline further. Should uncertainties remain high and unresolved – perhaps because the virus mutates; or a vaccine takes longer – then possibly the journey between the third stage of calm and the fourth stage of expectancy will be longer than we hope. What we do know is that markets, including bear markets, all have investment cycles.

It is true that the short-term horizon is extremely uncertain due to the unpredictability of this situation. However, it is important to remember that we very often have a long-term investment time horizon.

(1) The (Standard & Poor’s) S&P 500 Index is a market-capitalisation-weighted index of the 500 largest U.S. publicly traded companies. The index is widely regarded as the best gauge of large-cap U.S. equities – Investopedia.
(2) CNBC (https://www.cnbc.com/2020/04/30/stock-market-live-today.html) based on FactSet data as of 30th April 2020 market close.
(3) Financial Express