Investors around the world have faced five weeks of vicious price movements as the economic impact of the COVID-19 virus ripples out across financial markets.

On various days, several established world market indices have suffered their worst drops since 1987, the infamous Black Monday of October of that year. In some cases, some markets have had their largest declines on record. These drops in turn reflect a sharp contraction in world gross domestic product (GDP), with the economic impact inevitably causing a series of earning (profit) downgrades for global companies, which in the worst affected sectors may be severe.

But there are some important things to remember.

1) Green shoots of recovery may already be occurring.

As shown in the graph below… 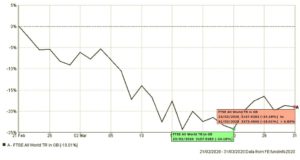 … the 24.18% fall from 21st February in the FTSE All World (1) peaked on 23rd March and probably includes much of what is described above. While there is uncertainty whether a recovery will be ‘V-shaped’, there will be a rebound as is evidenced by the fall reducing during the last week of the quarter to -19.01% on 31st March.

2) The world government and central bank response has been swift and enormous.

Although much of the monetary mechanisms have been used already (e.g. interest rates are close to or below zero), the fiscal (government spending) response that has and will continue to occur could be very large as it will be driven by political motives. For example, the UK’s Chancellor, Rishi Sunak’s recent Budget and subsequent de facto mini budgets have contained huge stimuli and a ‘whatever it takes’ section in relation to health and wider government spending. This has been copied across the globe.

3) Central banks and regulators have learnt from 2008 about the value of liquidity and business continuity.

Proactive measures to support the financial system began within days, for example the US Federal Reserve’s huge liquidity injection into money markets has been emulated in most developed markets; and on more than one occasion since.

However, investor focus should not be on 5 weeks; nor even five months… perhaps not even 5 years. But rather, as the 2020/21 tax year starts, the focus should be on the long term.

‘Zoom out’ your view of the markets 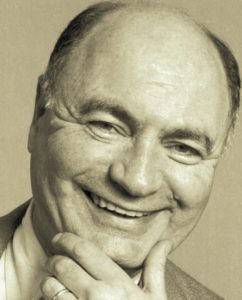 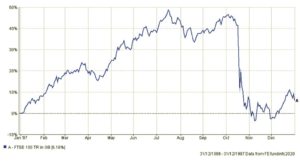 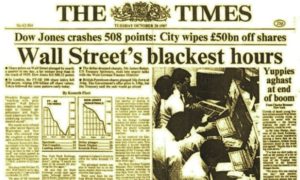 … showing that dramatic fall grabbed the headlines we remember today. However, the steady 40%+ gains in the first nine months of 1987 have been forgotten. And note; the FTSE 100 actually ended 1987 up on the year by over 6%. 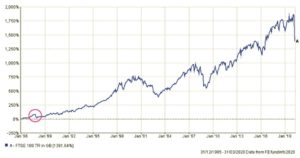 The area within the red circle hardly shows as a blip over this long-term time horizon.

During the last 5 weeks, the word ‘unprecedented’ has justifiably been used over and over again to describe the current global situation, and we are certainly not nearing the end of this crisis; we frankly do not know how long it will last. However, most investors working with a Foster Denovo Partner will have investment time horizons that stretch well beyond 5 months, even well beyond 5 years; some may even stretch into decades. Without claiming that 1987 – or 2001, or 2008, or 1929 for that matter – are similar events to the current volatile markets being experienced, and not wishing to underestimate the anxiety that is being caused, investors should try and remember Alan Abelson’s wise counsel; that is, don’t look down at the yo-yo, but focus your investment eyes on the top of the hill.

We will continue to monitor the situation and keep you notified of any changes that are made. Please seek professional advice if you wish to discuss your financial situation further.