Lesser known as the Earl of Merioneth and Baron Greenwich – and in more common placed language, Philip Mountbatten – he completed over 22,000 (0) royal engagements; that is equivalent to nearly one royal engagement for every one of the 23,500 days between  the Queen’s coronation in June 1953 and his retirement
in August 2017. 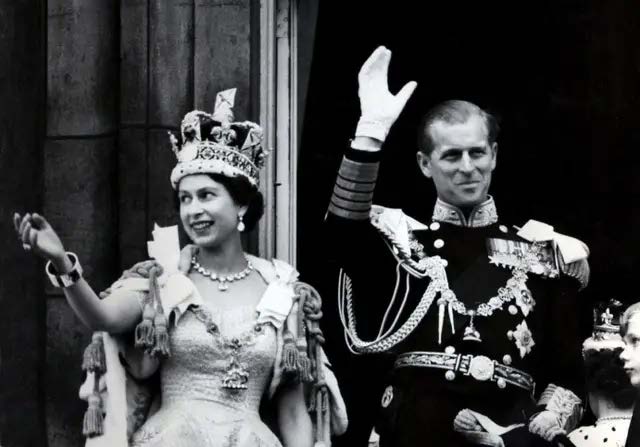 “Where did you get that hat?”
Allegedly the Duke of Edinburgh’s question to his wife, the Queen, when seeing her wearing the Crown at her Coronation

As has been often quoted since his death, at one event, he jokingly described himself as “the world’s most experienced plaque-unveiler”.

In the middle of the current national crisis caused by the pandemic, at the age of 99, just over 2 months from getting his own letter from the Queen, the Duke’s death brings into focus that the second world war generation – the last great national crisis – is slipping away. Whatever your views, whether monarchist or republican, or somewhere in between, the passing of the Duke of Edinburgh last week is the end of an era.

Zoom out your view of markets

The attacks on 9/11 killed just under 3,000 people with the estimated physical damage in financial terms running into unknown billions. Stock exchanges were closed with markets significantly down. More broadly, the attacks worsened the economic situation at the time including the bursting of the dot-com bubble in 2000.

The attacks on the Twin Towers and the Pentagon also led to the ‘War on Terror’. With troops predicted to leave 20 years later on 9/11 this year, the financial costs of the wars in both Afghanistan and Iraq will likely run in to the $trillions.

As can be seen by the graph below … 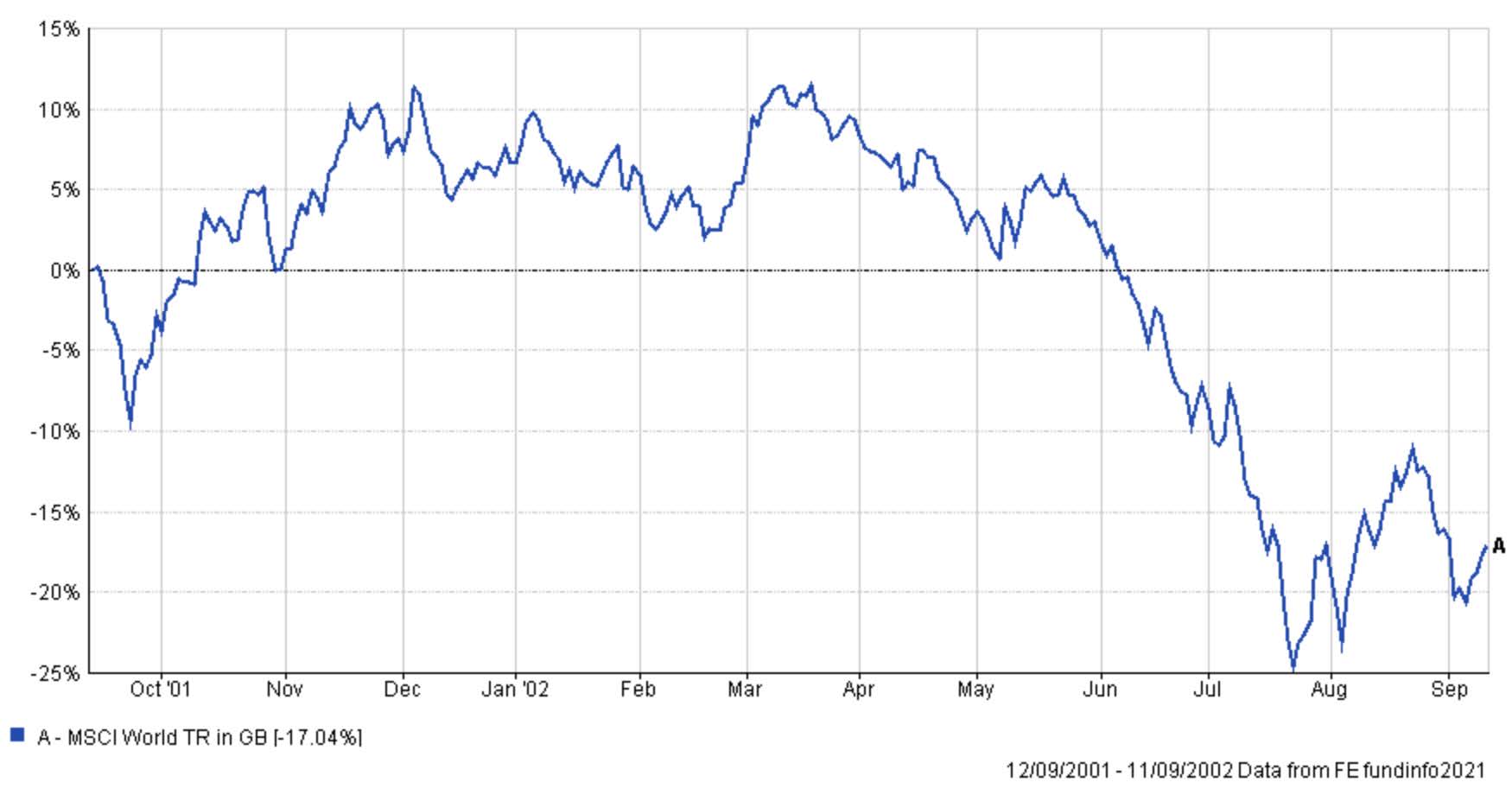 But what was the long-term impact? Viewing the same global index for the period of the 21st Century to date, in the graph below … 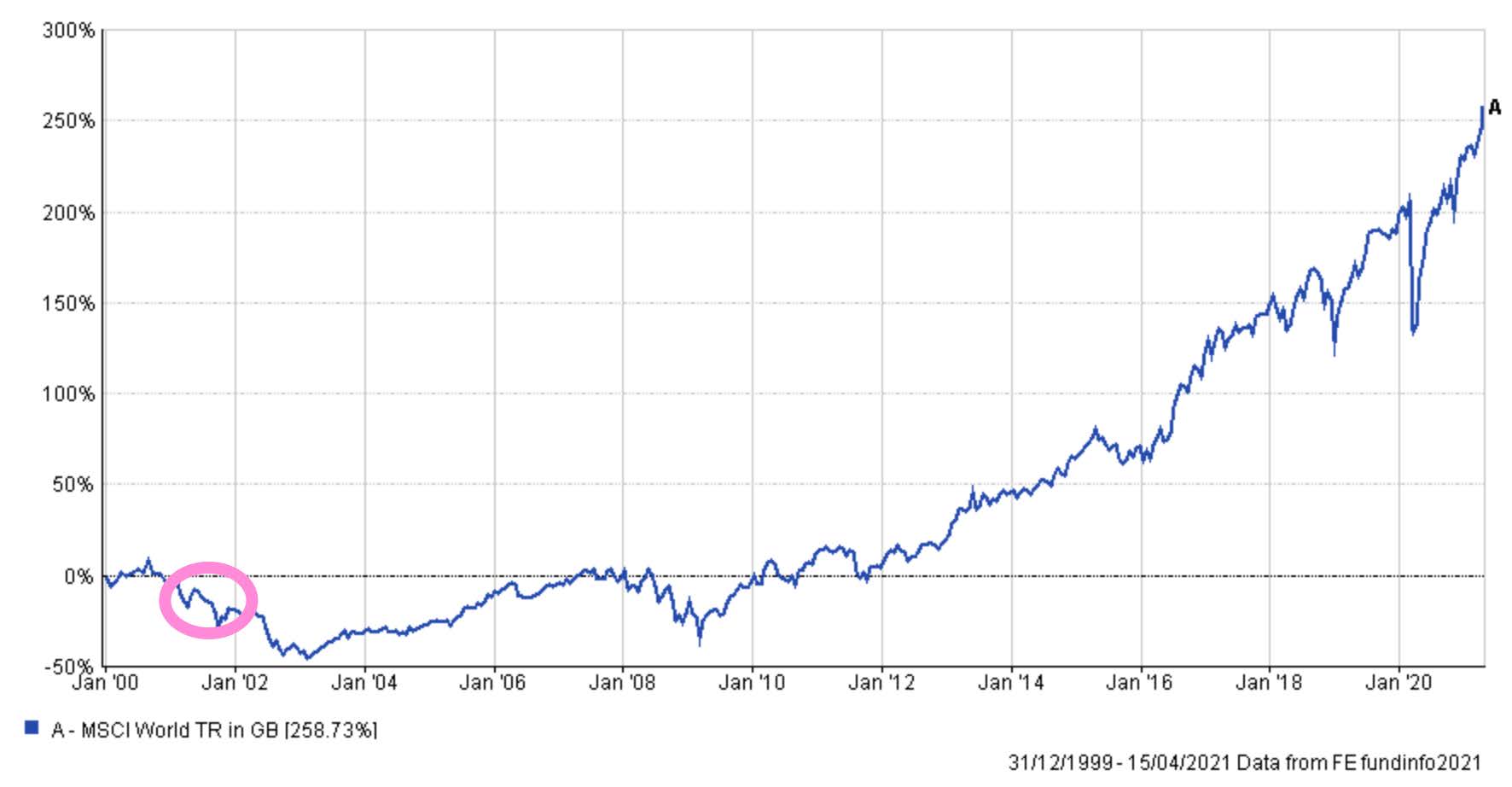 … the pink oval shows the impact over the period. In reality, a blot on the overall landscape. And even for the most ‘glass half empty’ person, the market had fully recovered by late 2005 / early 2006, well within the short-term investing time period of 5 years.

In the main the Great Financial Crisis that took place between 2008 and 2009 was caused by poor decision-making, risk taking and greed, predominantly facilitated through mortgagebacked securities created from subprime mortgages.

This resulted in many investment funds that owned AIG stock and derivatives collapsing, taking much of the market down.

Over the next couple of years, economies across the globe pumped £billions into their economies and central banks conducted asset purchases via massive quantitative easing programmes(4) to reassure investors, in an attempt to end any recession and avoid the global economy slipping into a 1930s style depression. As can be seen by the graph below … 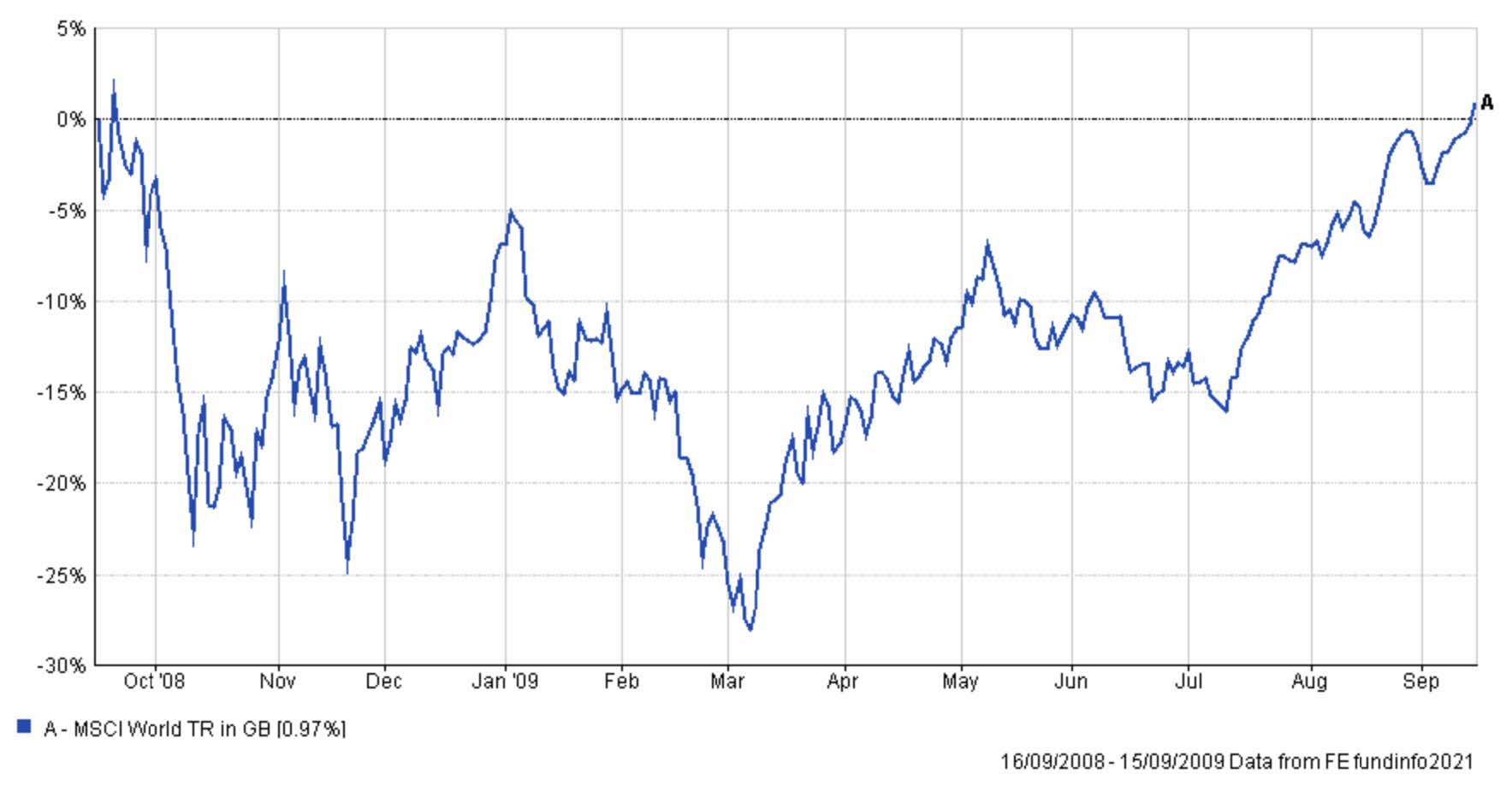 But what was the long-term impact? Viewing the same index below … 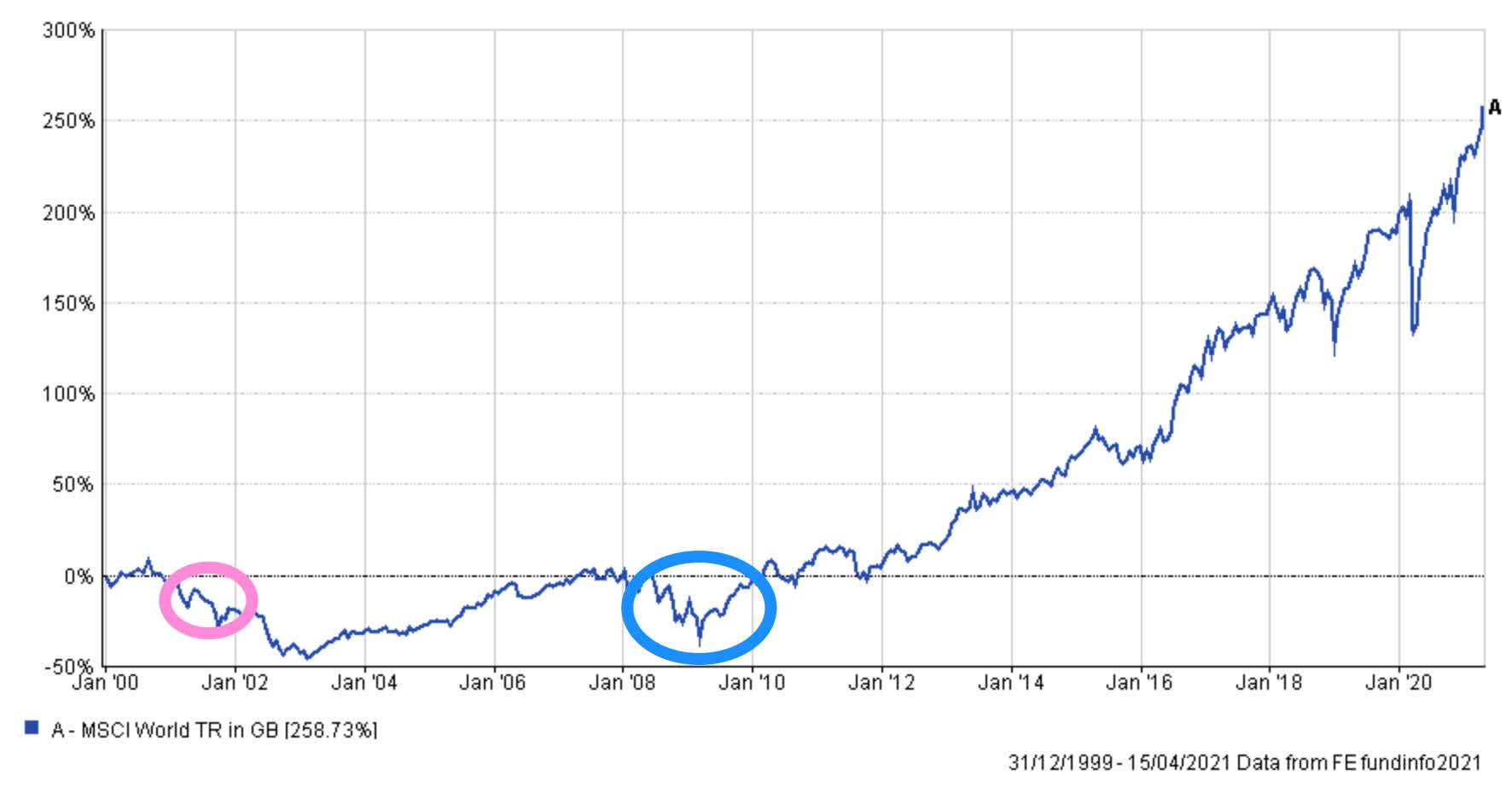 … the light blue oval above shows the 12-month period within the context of the 21st Century to date. When reviewed over this 20 year plus time horizon, it’s just another blot on the landscape.

In June 2016, the ‘Leavers’ won the UK referendum on whether to remain or leave the EU, the so called ‘Brexit’ referendum. After an extended period of political turmoil and two General Elections, the UK officially left the EU on 31st January 2020 although the transition period effectively meant that the period of retaining EU rules was extended until the end of 2020.

Although economic growth dropped significantly in the UK, with the UK government estimating lower growth, as the graph shows … 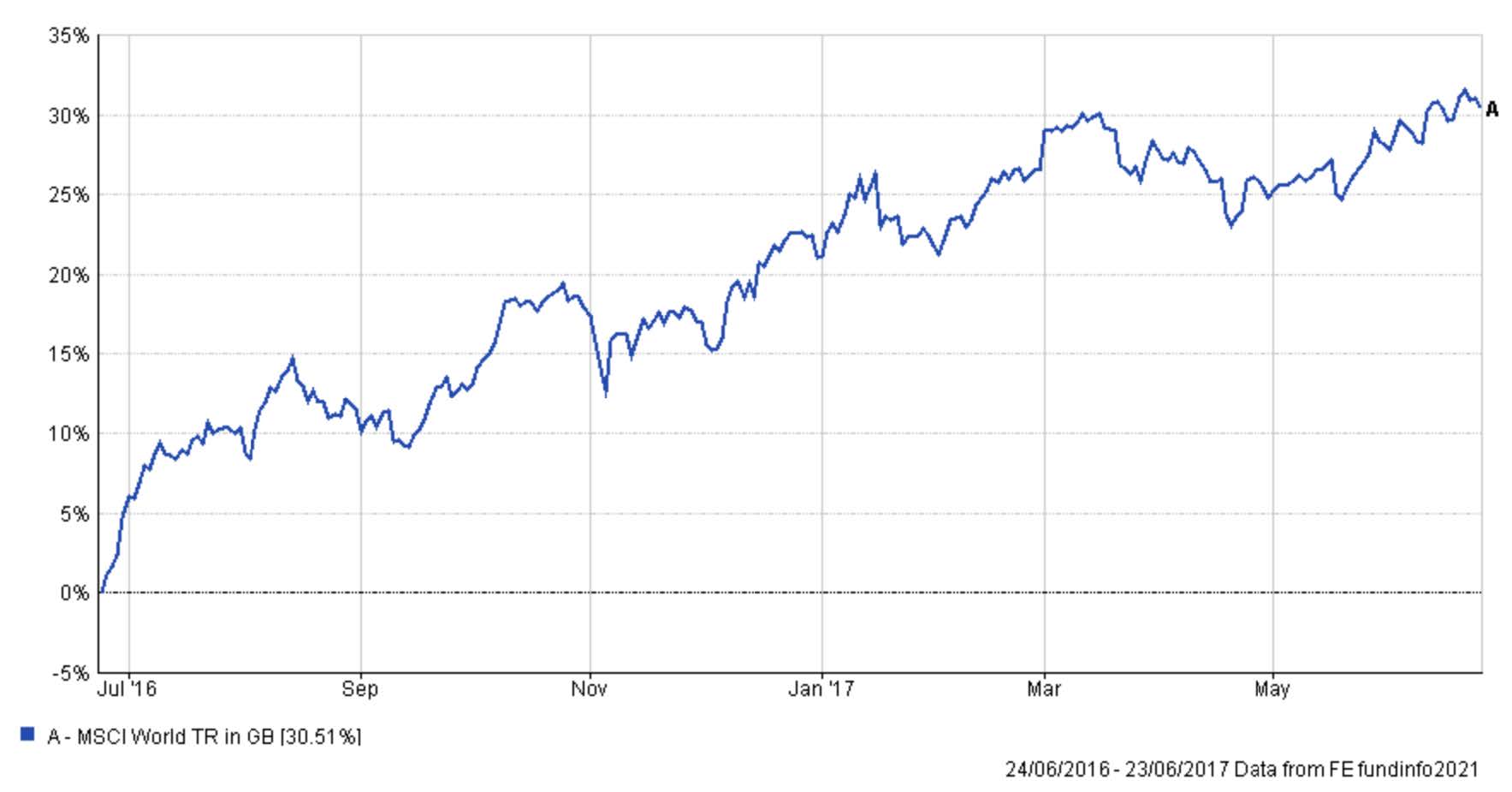 … in terms of the wider global context, the initial consequences of the Brexit referendum had very little impact on global markets.

And as the ‘21st Century’ graph below shows … 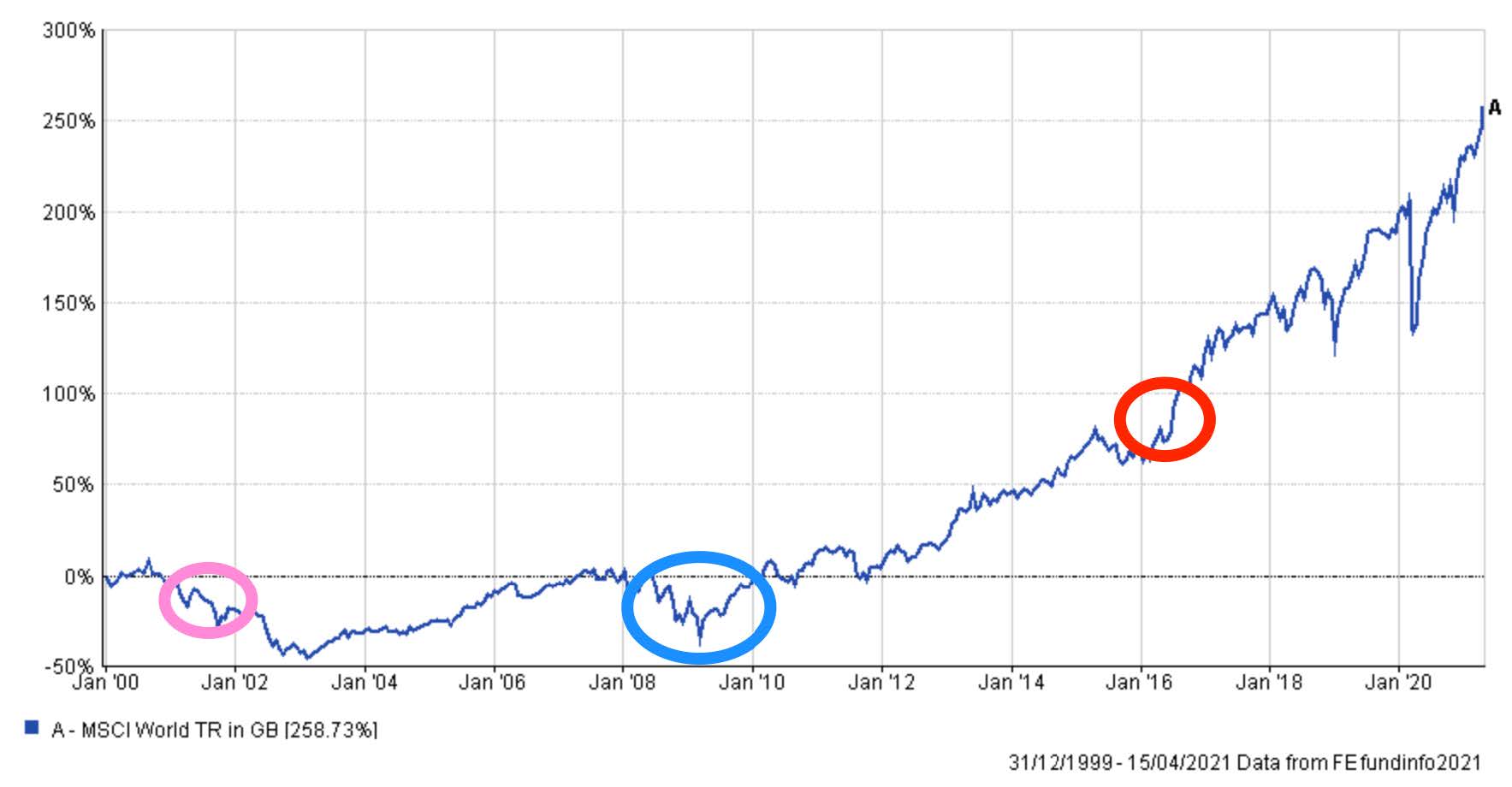 … when we consider the effect of Brexit on global markets during this extended period, the impact – as shown in the red oval – is not even a blot on the global landscape. Indeed, global stock markets continued their advance.

Stock markets began to fall during the end of February last year, finalising their drop by the end of March 2020. In the main, the crash was fuelled by significant falls in oil prices and global investor fears about the coronavirus spread and its impact on economic life.
And how has the pandemic impacted global markets? As the graph below shows, which begins in late February last year, just before the pandemic began to hit economies, and then covers the next 12 months … 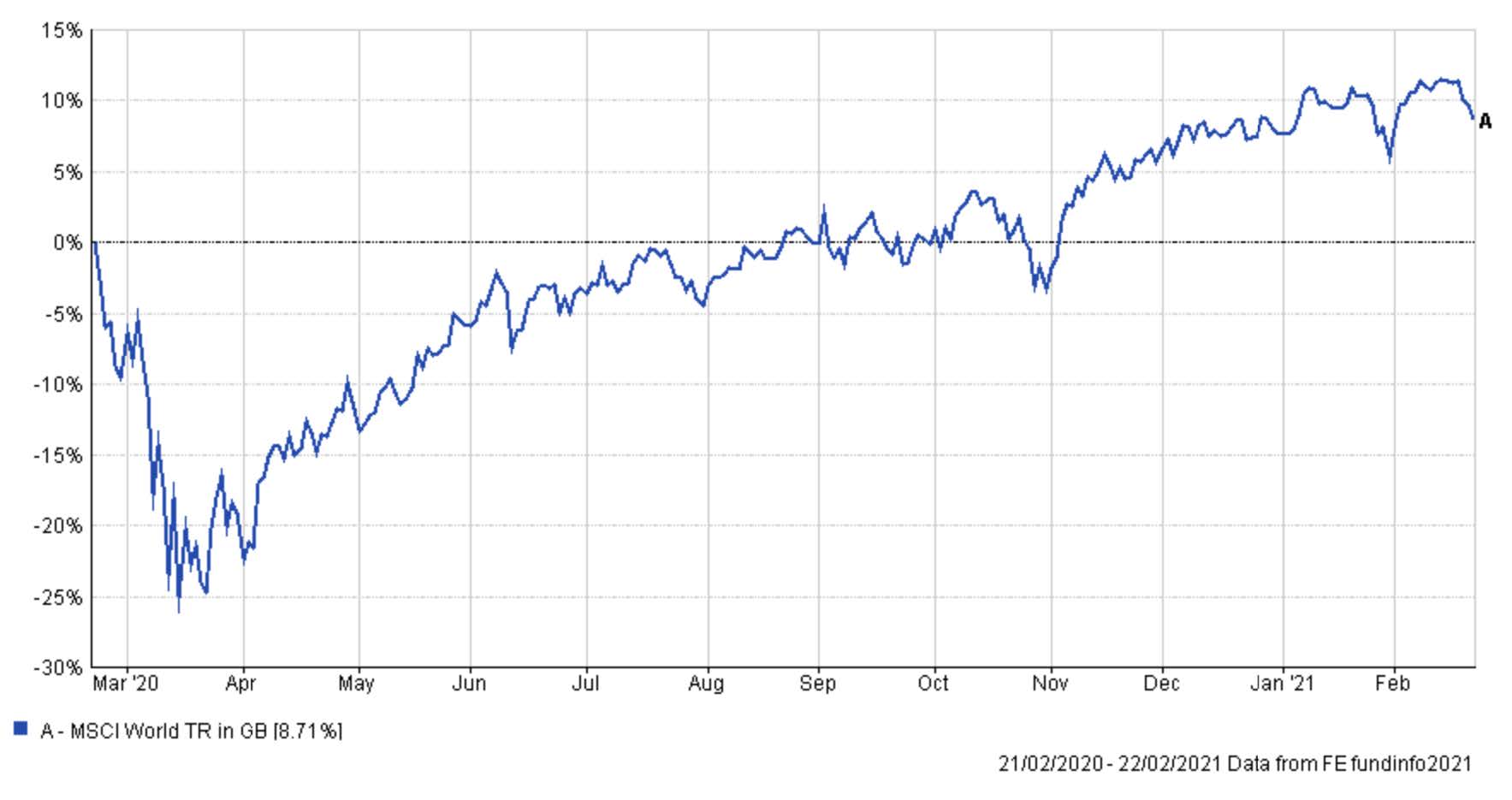 … the global market recovered all losses by late summer, and has since recovered to over 8% positive growth, in sterling terms, from when the pandemic commenced.

Looking at this 12-month period as part of the wider 21st Century context, the graph below shows … 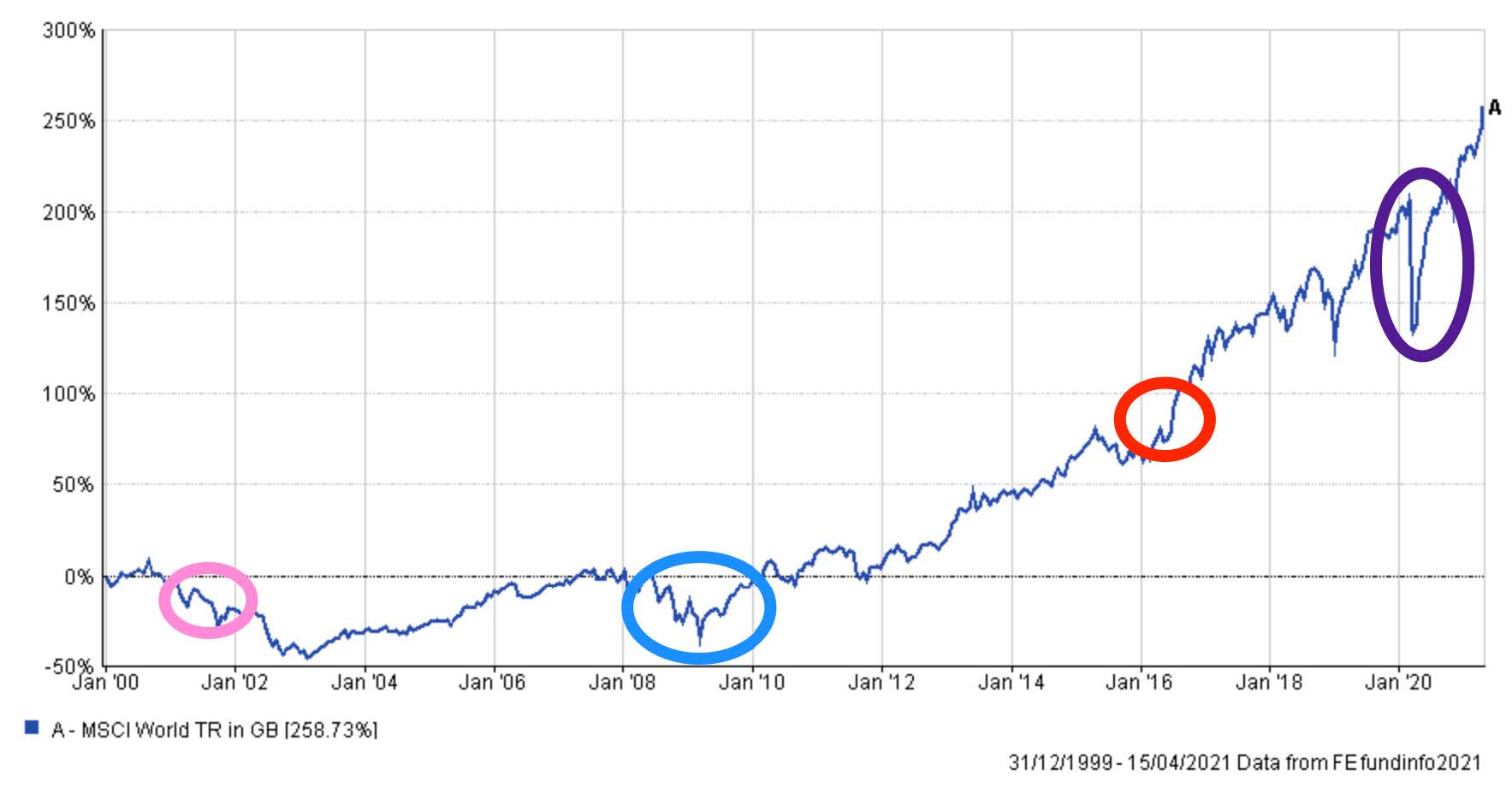 … the purple oval showing a steep decline for the start of this short 12-month period, counterbalanced very quickly by a return to growth. Once again, no significant detrimental impact on the long-term landscape can be seen.

Without claiming that 2001, 2008-09, 2016 or 2020 are similar events, and not wishing to underestimate the anxiety potentially caused by such events, investors should try and remember Alan Abelson’s wise counsel; that is, don’t look down at the yo-yo, but focus investment eyes on the top of the hill.

Irrespective of short-term market falls and remembering that “past performance is no guide to future returns”, from an investment perspective, investors should have a balanced, longer term
view.

3. MSCI is a leading provider of critical decision support tools and services for the global investment community – https://www.msci.com/who-we-are/about-us

4. To execute quantitative easing (QE), central banks increase the supply of money by buying government bonds and other securities. Increasing the supply of money lowers the cost of
money—the same effect as increasing the supply of any other asset in the market. A lower cost of money leads to lower interest rates. When interest rates are lower, banks can lend with easier
terms. QE is typically implemented when interest rates are approaching zero because, at this point, central banks have fewer tools to influence economic growth – https://www.investopedia.com/terms/q/quantitative-easing.asp