‘Decorgate’ – Whatever your political persuasion, or even if you don’t have one at all, recent events have certainly caused issues for the Prime Minister. 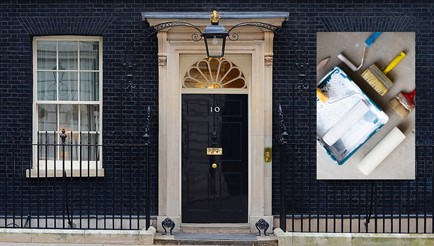 Whoever’s account of events you trust, it is likely that irrespective of what he says, his focus may be distracted from core priorities such as the UK’s economic recovery and the easing of lockdown restrictions in England.

No matter how these events work out, although the Prime Minister may never wish to see a paint brush ever again, this market briefing will show that UK markets are unaffected by any Number 10 (Number 11 technically) refurbishments.

World ‘back on the move again’?

Stock markets on both sides of the ‘pond’ have seen record levels over the last few weeks. As can be seen in the US, from the start of the bear market on 21st February 2020, following a series of major companies issuing results stronger than had been expected, the US stock market (represented here by the iShares S&P 500 ETF in pounds sterling and after fund charges), has shown significant positive returns. 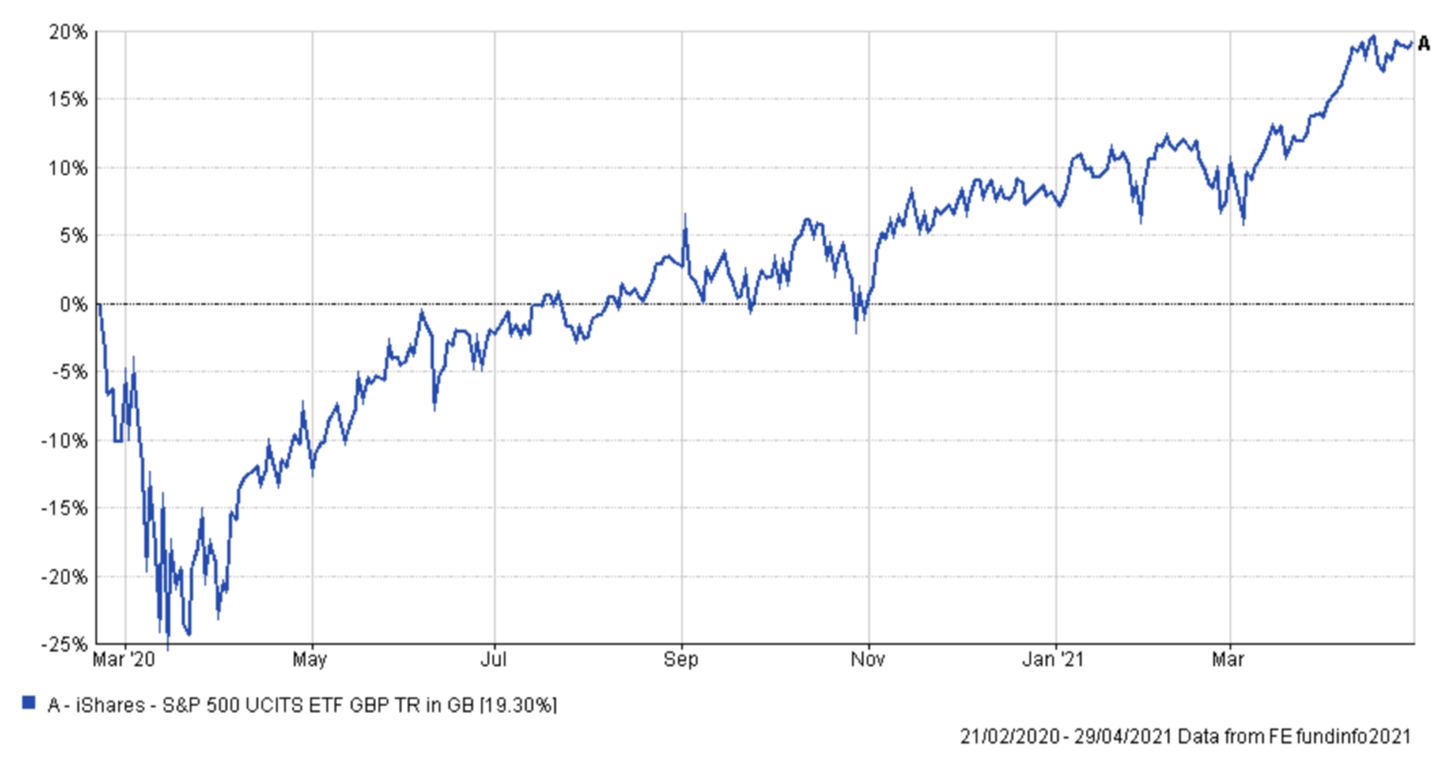 Tech stocks were again one of the main drivers. Shares in Apple increased after the company posted results that easily exceeded expectations. Facebook shares also advanced as results showed a jump in users and advertising revenue.

This US stock market news was combined with the announcement of extensive measures from President Biden aimed at overhauling US infrastructure in addition to proposals aimed at supporting families, children, and students. This overall narrative lead to stocks continuing their recovery from the bear market last year.

Whilst remembering that most of our clients are investors and not traders, professional stock pickers positively interpreted President Biden’s address to a joint session of Congress, where he said that “America is back on the move again”. He also took his first speech to a joint session of Congress to push his $2 trillion(2) infrastructure plan and officially unveil a $1.8 trillion(3) plan aimed at supporting children, students and families. These enormous numbers in part will be paid for through tax increases on wealthier Americans. This reverses much of the Trump tax cuts which disproportionately benefited those on higher incomes.

Market traders were also encouraged by the US Federal Reserve’s latest monetary policy statement(4). This included no changes to policies, neither interest rate nor quantitative easing, but did feature the recent improvements in economic conditions in the US.

From a global perspective, last month the International Monetary Fund (IMF) said that the progress in the administering of the Covid-19 vaccine had caused a more resilient performance than had been expected in many countries, which would power a faster global recovery from the pandemic in 2021. This is despite the obvious unequal distribution of vaccines worldwide.

After contracting in 2020, the IMF said the world economy would now grow by 6% in 2021 and a further 4.4% in 2022; all signs that the vast economic stimulus from central banks and governments had averted a heavier recession and meant the time to commence economic recovery was shortened(5).

Moving to events closer to home, the IMF showed that the UK economy contracted by less than expected earlier this year despite the toughest Covid restrictions since the first wave of the pandemic(6).

And, as shown by the graph, growth returned in February – up to 5.3% – as businesses and households prepared for the easing of controls after the Westminster government outlined its roadmap for exiting lockdown in England alongside the three devolved nations.

As a result, the Bank of England forecasts show potentially significant increases in growth as the UK economy benefits from the rapid progress from the Covid vaccine roll out. This may fuel a boom in consumer spending from pent up demand. 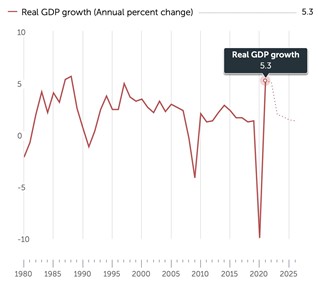 Although the UK unemployment rate was 6.1%, it fell for a second month in February, raising hopes that a full-blown jobs crisis can be avoided.

However, millions of people remain furloughed.

Unfortunately, job losses are expected to rise once the scheme is made less generous in early summer and then closed in early autumn.

Working habits are expected to change as well – ‘blended working’ – as office workers take longer to return to city centres and remain working from home for longer. 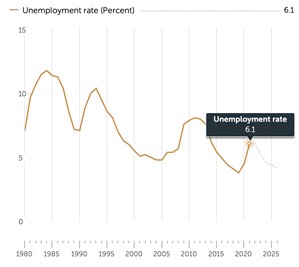 Along with increased consumer activity, industrial output was seen to be growing strongly. There was – and remains – some border disruption caused by Covid and Brexit, but trade between the UK and the EU is recovering(6).

Fears over some restrictions being reimposed continue, especially as Covid infection rates accelerate in India. Despite these fears, UK stock markets have rallied recently as infection rates have dropped, with travel, tourism and retail companies gaining most.

As can be seen in the graph – which again starts at the beginning of the bear market on 21st February 2020 – UK markets have recovered since the bottom of the market in March last year (as represented here by the two iShares FTSE ETFs in pounds sterling and after fund charges). 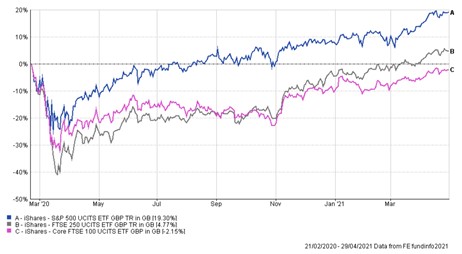 As consumers return to high streets across all four nations of the UK, with pub beer gardens (irrespective of the weather) becoming full of the noise of drinkers enjoying their first pint in 2021, in addition to gilet-protected alfresco dining, the UK is poised to emerge from its Covid induced slumber.

Without claiming that the UK – or indeed the world – is anywhere near out of the woods in terms of how the pandemic has affected markets in the short term, and not wishing to underestimate the anxiety caused by Covid, and whilst remembering that “past performance is no guide to future returns”, from an investment perspective, investors should have a balanced, longer term view of investing.