The Westminster government has confirmed it will raise National Insurance (NI) by 1.25% from April 2022 to help tackle increasing NHS waiting lists and social care costs in England in the wake of the Covid-19 pandemic.

“Those who earn more will pay more and because we are increasing the dividend tax rate, we will be asking better off business owners and investors to contribute more.” He continued to say that, “the tax hike will raise over £36bn over the next three years.”

Although the burden for funding social care in England will not exclusively be borne by an incease to NI, the vast majority of the funding will come from this rise. Whatever your views on this increase, understanding what National Insurance is and its history will provide useful context. So what is National Insurance?

What is National Insurance?

What is the history of National Insurance? 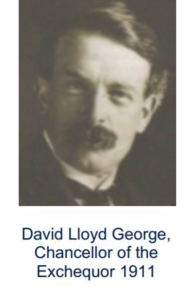 the Liberal Party Chancellor of the time stood up in the House of Commons and said, “There is no doubt that there is great reluctance on the part of workmen to resort to the Poor Law medical officer. He [the workman] has to prove destitution, and although there is a liberal interpretation placed on that by boards of guardians,  still it is a humiliation which a man does not care to bear among his neighbours.

He continued, “What generally happens is this. When a workman falls ill, if he has no provision made for him, he hangs on as long as he can and until he gets very much worse. Then he goes to another doctor (i.e. not to the Poor Law doctor) and runs up a bill, and when he gets well he does his very best to pay that and the other bills. He very often fails to do so.”

Referring to the implementation of what became National Insurance, he concluded with, “I do not pretend that this is a complete remedy… But I think it is partly a remedy… It lays bare a good many of those social evils, and forces the State, as a State, to pay attention to them. It does more than that… till the advent of a complete remedy, this scheme does alleviate an immense mass of human suffering, and I am going to appeal, not merely to those who support the

Government in this House, but to the House as a whole, to the men of all parties, to assist us.”

“I appeal to the House of Commons to help the Government not merely to carry this Bill through but to fashion it; to strengthen it where it is weak, to improve it where it is faulty. I am
sure if this is done we shall have achieved something which will be worthy of our labours.” (1)

With these words, Lloyd George concluded the debate that would issue in what we now know as National Insurance.

As described above, the introduction of National Insurance was made under the National Insurance Act 1911. As Lloyd Geoge said he did not pretend that this was a complete remedy, but was one of the first steps towards the creation of the welfare state.

The debate lasted over three years as the concept – based on Lloyd George’s detailed observations of a scheme developed in the relatively new country of Germany (just over 40 years after it unified) – was first proposed in the 1908 ‘People’s Budget’ by Lloyd George.

The NI scheme came into effect in July 1912. It was originally intended to create a national system of insurance for working people against illness and unemployment. There were three contributors to the scheme. All wage-earners aged between 16 and 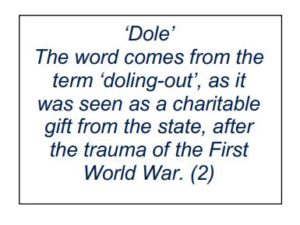 70 were obliged to contribute an amount per week, in addition to which employers and the state paid into the scheme. In return, workers were entitled to a level of free medical care and advice, and an amount of ‘dole’ of a set amount, for a set period of time per year in the event of unemployment.

Originally the scheme was administered by ‘approved societies’. These were voluntary friendly societies authorised and underwritten by the Government, and regulated by four Insurance Commissions.

By 1919, the powers of the Insurance Commissions were taken over in England by the new Ministry of Health, and in Wales and Scotland their respective Boards for Health. In 1925, the Ministry of Health took on board the administration of contributory pensions under the Old Age, Widows’ and Orphans’ Contributory Pensions Act 1925. 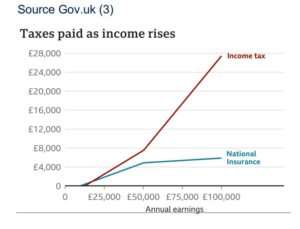 Throughout its history the contributory principle has underpinned National Insurance.

What has changed is the link between individual National Insurance contributions and the benefits received has eroded.

There has been widespread criticism of the proposals. Unlike the rate of income tax, which rises sharply once you reach earnings of about £50,000, National Insurance only rises marginally at this point.

That means an increase would have a proportionally smaller impact on the highest earners.

Other criticism includes that it would be unfair particularly on younger people and other taxes might be more suitable. It’s also not only employees that will pay more; it will also be paid by employers.

Whatever you own views, only time will tell how successful the modern day Conservative Westminster government is in adding social care in England to what National Insurance is intended to pay for. It will certainly be a passionate debate, with voting beginning today.

Irrespective of current events, investors should have a balanced, longer term view and should take the appropriate advice in regards to their future financial planning needs, including preparing for the potential impacts from later life.

At times like these, it is even more important that you are taking advice on your finances by a qualified and experienced financial planner. If you think any of your friends, family or colleagues would benefit from speaking to us, especially in the current situation, then please introduce them to your Foster Denovo Partner who would be happy to help.

7th September 2015: British archaeologists announce the discovery of a Neolithic “superhenge” under 3ft of earth at Durrington Walls (4)