According to many news outlets, at the time of writing whilst Ukrainian resistance remains strong, Russian forces are in Kyiv.

How should you react?

Emotions or reactions to current events may influence short-term equity prices. However, these short term effects on stocks will pass and give way to the fundamentals of the underlying companies in the long term. Managing investments is similar to managing emotions and understanding previous time to recovery when similar events have happened, and putting events into context should assist. 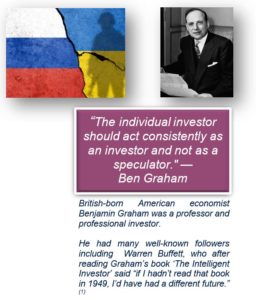 Graph 1 shows the period of time immediately before the start of Gulf War 2 in March 2003 through to when the global equity markets (red line) recovered just over 3 and a quarter years later. 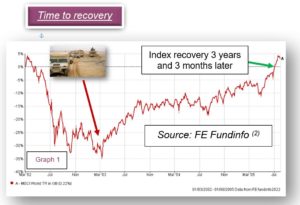 As graph 1 shows, markets fell in the period of time before actual war broke out in the Gulf, but once the war broke out – and fully acknowledging the human trauma caused by such an event – markets began their recovery. The Russian-Ukrainian crisis has followed a similar course. Markets have been falling since before Christmas – significantly but not wholly because of this crisis – and, as at the time of writing, most significant markets have risen since Russia invaded early on Wednesday.

Although there are obvious differences between the Gulf War  and the current eastern European war, there are similarities.

Graph 2 shows the period of time covered in graph 1 – but seen through the perspective of the whole of the 21st century.

Although the period in question did cover over 3 years, when contrasted against an appropriate length of time for a long term investor – as opposed to a short term speculator – markets corrected themselves. 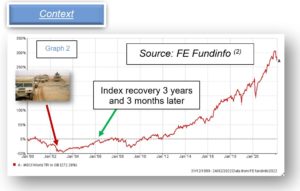 It is only natural for long-term investors to be unsettled when their investments fall, especially over a short period of time. Clearly at times of significant crisis – such as this Russo-Ukrainian war – patience combined with level headed thinking are essential to avoid emotional reactions to short-term market movements. However, as Ben Graham said, long term investors should not be short term speculators.