What a summer of changes the United Kingdom has experienced. 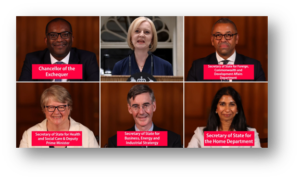 A new monarch, a new government incorporating a new prime minister and virtually a new cabinet, including a new Chancellor of the Exchequer.

What should investors be thinking?

Most of us are only interested in currency exchange rates when we’re about to go abroad. Recent falls in the relative value of the

pound against other currencies have wider impacts than simply resulting in your, birra, byra, bière, cerveja or cerveza costing more though.

As graph 1 confirms, recent weeks have seen the pound fall dramatically against the US dollar to a closing level on 27th September of $1.07, (having briefly touched an all-time low of $1.03). 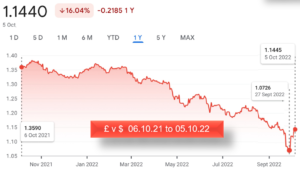 Subsequently, there has been some recovery partly due to the policy U-turn that the 45p tax rate would remain in place. That said, the pound falling from $1.35 to $1.14 – a fall of over 16% in just over a year – clearly has more of an impact than just the price of a pint abroad, and importantly affects broader economic matters which may affect investors.

So, firstly, why has this happened?

Why has this happened?

The so called ‘mini-budget’ on 23rd September – officially known as the ‘fiscal statement’ – saw a significant change in the Tory government’s economic policy. In measures that were challenged by politicians, economists and commentators from both sides of the aisle, under the theme ‘dash for growth’, new chancellor Kwasi Kwarteng announced very significant tax cuts which were presumed 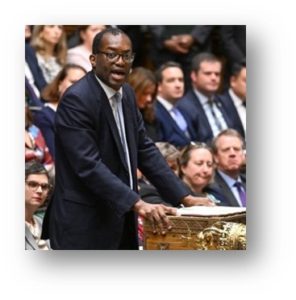 to be paid for by increased government borrowing, issuing gilt (2) securities. With markets already volatile, the proposals caused further significant anxiety. This was exacerbated by the lack of oversight from the Office of Budget Responsibility (OBR) to back up the political rhetoric. There also was no preview or expectations given to the market of the plans. 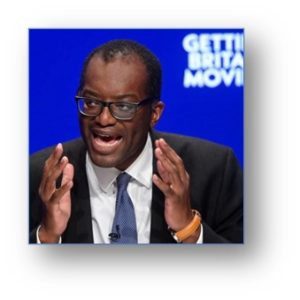 costed, deeming them ‘unfunded’, together with ambitious claims regarding stimulating growth, meant markets were left wholly unconvinced. This impacted especially the Gilt  and Sterling markets as the lack of information meant data was difficult to obtain to verify claims, resulting in market confidence in ‘UK plc’ eroding rapidly, hitting UK government gilts and the pound sterling. An old-fashioned run on the pound ensued.

What are the consequences of a weak Pound?

The last half century or so has seen the Pound gradually fall against the US Dollar which has meant travel to the US., including holidays, gradually becoming more expensive for the British. Travel costs have also increased to countries that are pegged to the Dollar, such as the Gulf states. The 16% fall against the Dollar since last autumn will only exacerbate these cost increases.

Travel to the Eurozone will not be impacted so much, however, as the Euro has seen its own significant falls against the US Dollar resulting in the Pound-Euro rate being only marginally affected.

A falling Pound means that money won’t stretch as far for goods and services purchased from abroad; for example, oil. Imports are therefore more expensive. The UK imports a lot of physical goods and raw materials which will feed directly through to increased inflation.

Oil and other commodities are priced in US Dollars which means that a visit to the petrol station has become more expensive despite recent falls in the price of oil.

Other products affected include imported food. One silver lining is that most British food is imported from Europe which as mentioned above has seen the Euro fall against the US Dollar meaning price rises won’t be as dramatic.

It depends on the business and the markets operated in, including which countries, if any, they trade with. For example, for companies that mainly export, a weak Pound is a positive as it makes their products cheaper to buy for their non-British purchasers. However, the flip side is that any components or raw materials needed that originate outside the UK will cost more, likely neutralising any benefit.

In terms of larger companies, such as the top 100 British companies, a weaker Pound will mean their profits likely rise. Why? Most of them make their money outside the UK in non-Sterling currencies which means they will be worth more in Sterling terms because of the fall in the Pound. This will likely have a positive impact on their share prices, which brings us onto the impact on investors of a weak Pound.

What’s the impact on investors?

As with businesses, it depends. It depends on where an investor is investing in terms of geography, sector and industry and, crucially, in what currency they are investing in. For example, compare graph 2 with graph 3 …

… and you can see the impact of a weak Pound when investing in non-UK investments such as this major US stock market. Graph 2 shows that over the same time period shown when looking at how the Pound has fallen against the Dollar (i.e., 6th October 2021 to 5th October 2022), the return of this stock market when invested in via Pounds, returned a positive of 6.24%. Whereas graph 3, over the same time period, but invested in via the source US Dollars, returned a negative of -11.96%. That’s a difference of 18.2% investing in the same stocks, with the only difference being the currency used to translate the returns.

As can be seen, although the weakness of the Pound does affect travellers, consumers and some companies negatively, in terms of investors it has provided shelter from quite turbulent markets such as this major US stock market.

It is understandable to be concerned by the current spate of economic news headlines such as the Pound falling quickly, and inflation hitting record highs. However, listening to news items that do not discuss the whole picture – such as the broader context of the Pound falling, as shown in graphs 2 and 3 above – can lead to unnecessary anxiety.

International diversification can greatly help with returns for UK investors especially when the Pound is weak. Investors should therefore focus on ‘smart diversification’. This should include investing across different geographical sectors, minimising a bias towards any region or country, and across different asset types, such equities and specialist investments

It should also involve investing across investment styles, which includes active management and index/passive investing. And finally, they should invest across different investment philosophies such as Growth and Value. 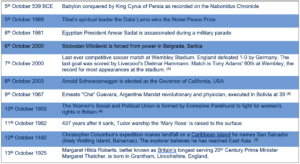 Gilts are government bonds, so they are particularly sensitive to interest rate changes. They also provide diversification benefits because of their low or negative correlation with stock markets. Gilts often respond strongly to political events, such as Brexit.” – https://www.investopedia.com/terms/g/gilts.asp 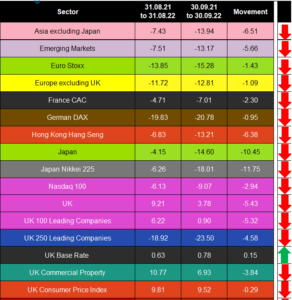 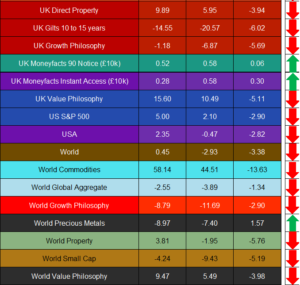 The ‘Key Indicators’ shown in the table to the left are designed to provide an overview analysis of different asset types, different geographical jurisdictions and industrial sectors.

They also include statistics that show the changes in inflation, property – both residential and commercial – together with how UK base interest rate and ‘high street’ interest rates change.

The comparison period is over 1 year and compares the difference on a monthly basis over that 1-year period.

Every quarter the key indicators will also include data that is published quarterly in arrears, for example UK Gross Domestic Product (GDP) and unemployment figures for the UK and where available overseas geographical jurisdictions.

The source of this data unless stated otherwise is FE Fundinfo (3).

This publication is marketing material. It is for information purposes only. This statement is for the sole use of the recipient to whom it has been directly delivered by their Foster Denovo Partner and should not be reproduced, copied or made available to others. The information presented herein is for illustrative purposes only and does not provide sufficient information on which to make an informed investment decision.