Kwasi Kwarteng has become the second shortest Chancellor of the Exchequer in history when he was replaced by former Health Secretary and two-times Tory leadership candidate Jeremy Hunt, who became the fourth Chancellor in 101 days.

In the ‘fiscal statement’ – brought forward by two weeks in a bid to stabilise markets – Mr Hunt said he would reverse almost all the tax cutting measures in the growth plan and announced significant amendments would now be made to the Energy Price Guarantee from next April. At the time of writing, the only parts of the ‘mini-budget’ to survive will be the cut to National Insurance, the cancellation of the Health & Social Care levy and the cut to Stamp Duty in England and Northern Ireland.

The fall in bonds – what should investors be thinking?

“A bond is a fixed-income instrument that represents a loan made by an investor to a borrower (typically corporate or governmental). A bond could be thought of as an I.O.U. between the lender and borrower that includes the details of the loan and its repayment terms…

Bond details include the end date when the principal of the loan is due to be paid to the bond owner and usually include the terms for variable or fixed interest payments made by the borrower.” (1) 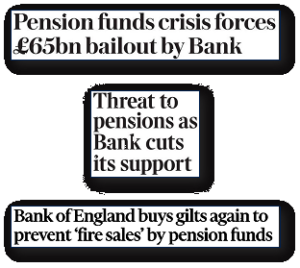 “A bond is referred to as a ‘fixed-income instrument’ since bonds traditionally paid a fixed interest rate (known as a coupon)  to debtholders.

Bonds have maturity dates at which point the principal amount must be paid back in full or risk default.” (1)

As shown in graph 1, the capital value of government bonds – known as gilts (3) – fell sharply (line B) as anxiety spread after the ‘mini budget’ and then again when the Bank of England confirmed that their recent gilt buying  support was ending last Friday 14th October, originally stating that there was ‘dysfunction in this market’  (long-dated government debt) and ‘there would be a material risk to UK financial stability’ (4). 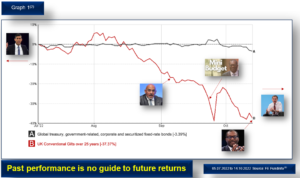 The Bank continued to say that they would ‘carry out temporary purchases of long-dated UK government bonds from 28th September. The purpose of these purchases will be to restore orderly market conditions.’ (4) In a point seemingly missed by many commentators, the Bank originally stated on 28th September that ‘these purchases will be strictly time limited. They are intended to tackle a specific problem in the long-dated government bond market. Auctions will take place from today until 14 October’. (4)

Why has this happened?

UK fixed income (bonds) was impacted by a radical and entirely unanticipated change in government fiscal policy, impacting sterling and UK government gilt yields which spiked up substantially. The massive £45 billion of unfunded tax cuts spooked the markets, both domestically and internationally, and investors demanded a much higher return (bond yield) for UK Government gilts, which were previously perceived to be, perhaps incorrectly, a ‘risk free asset’. The borrowing costs for UK plc rose so rapidly that it forced the Bank of England to intervene and restart their bond buying programme for long dated gilts and save many defined benefit pension schemes from a worrying liquidity problem and ultimately potential insolvency.

Another consequence of the fiscal policy was a ‘run on the pound’ particularly against the US $.  Although there has been a partial recovery, the pound fell dramatically against the US dollar to a closing level on 27th September of $1.07, having briefly touched an all low of $1.03.

What did the Bank do?

The Bank of England first intervened to save pension schemes on 28th  September. The Bank needed to do this as following the government’s ‘mini budget’ announcements, confidence in the UK plummeted, ending up increasing the cost of issuing government bonds.

Bonds – specifically inflation-linked gilts – are used mainly by defined benefit pension schemes. These types of pensions are becoming rare in the private sector as their inflation protection makes them expensive to own. In general, they use nominal and index-linked government bonds as one of the main assets to balance their liabilities to pay pension members benefits when they become due. These assets are underpinned by the government as the bonds ultimately lend money to the UK government, who has always repaid their debts.

However, the pressure on gilts continued to increase due to the Bank of England confirming that it meant what it said i.e., it would only ‘carry out temporary purchases of long-dated UK government bonds’ ‘until 14 October’ resulting in gilt markets reacting nervously causing a reversal in the earlier partial recovery.

The next few days will determine whether the new Chancellor scrapping the vast majority of the ‘mini budget’ with his fiscal statement will help the UK gilt and sterling markets. Stability is vital after such a turbulent period.

What should this tell investors?

It is understandable for investors to be concerned by the current spate of economic news headlines especially when a perceived ‘safe’ asset type, such as gilts, falls so dramatically in a short space of time. However, listening to news items that do not discuss the whole picture – such as not knowing that global fixed income including bonds, although down, are nowhere near as low as UK gilts – can lead to unnecessary anxiety.

Global diversification can greatly help with returns for British investors especially when UK bonds and gilts are falling. Investors should focus on ‘smart diversification’. This should include investing across different geographical sectors, minimising a bias towards any region or country and more broadly than just the UK and across different asset types, such as equities and specialist investments. It should also involve investing across investment styles, including active management and index/passive investing. And finally, investors should invest across different investment philosophies such as Growth and Value and industry sectors.